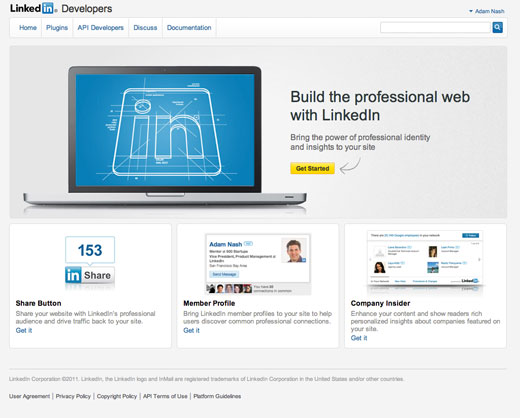 LinkedIn today launched a developer platform with new APIS and social plugins that can be easily added to any site.

While social networks like Facebook and Twitter opened their platforms up to developers quite some time ago, LinkedIn is only just beginning to enter the playing field — perhaps owing to its somewhat less social, more professional nature.

The new plugins are easily embeddable with a few lines of JavaScript, making them accessible to anyone capable of making changes to their site, not just developers.

LinkedIn’s Share button plugin is one of these new plugins, which will start showing up alongside the ubiquitous Facebook and Twitter sharing buttons on many sites. LinkedIn’s button comes several months before Google’s own +1 enters the fray.

Several of the new plugins embed information found on LinkedIn into sites, such as your member profile and company profile. These will join the Facebook profiles found in many personal sites, while the Company Insider plugin is for enhancing content and will display recent news and insights on a company alongside a blog post (for example) that covers them.

What’s really interesting is the official launch of LinkedIn’s OAuth API which has just been through a month-long beta test with third-party developers. Facebook, Twitter and Google have had a great degree of success in convincing web app developers to use their platform to handle authentication, and it saves users plenty of time.

LinkedIn will fill a crucial gap among credible OAuth providers — I’m always loathe to use my Facebook account to log into business-oriented apps and I imagine there are plenty of others out there who’d much rather log in with LinkedIn in those cases.

It’ll be interesting to see how soon we see LinkedIn’s plugins appearing on the web’s most popular sites. Though they’re late to the party, they fill a specific niche and so I expect them to do quite well.