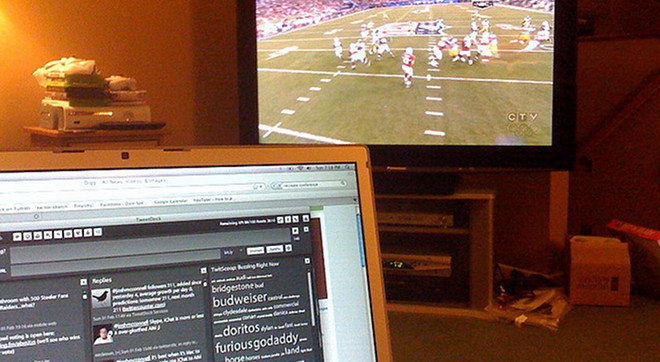 Showing just how important social media is to the way we watch big events on TV these days, a study just published shows that yesterday’s Super Bowl was the subject of 4.5 million tweets.

According to French social media monitoring service Semiocast, in the six-hour period around the event, there were 25% more tweets published around the globe than usual for the time period. Perhaps surprisingly, the majority weren’t from the US. The company says the US accounted for 30.4% of all tweets, a 50% increase from their share at that time the day before.

For many, the ads during the Superbowl are more of an attraction than the football itself, challenging agencies to create the most talk-about spots for their clients (and you can catch a round-up of the best ads here). While there are many ways of measuring how successful these ads are, social media discussion is a good place to start and Semiocast has called a winner – Doritos.

According to the company’s figures, Doritos was mentioned in 80,000 tweets, Transformers in 49,000, and Pepsi in 47,000. Of the Doritos tweets, 58% were positive, mainly describing it as funny, while 16% were negative, using words like “Repulsive” and “dumb” or criticising its cost.

While Best Buy seemingly scored a hit with its Justin Bieber-starring ad, it was Bieber who got more of the Twitter love. He was reportedly the subject of 93,000 tweets while Best Buy itself only got at 29,000 tweets. Given the general popularity of Bieber on Twitter, that’s hardly surprising.

We’ll undoubtedly see more analysis of social media’s role in this year’s Super Bowl over the next day or two, especially as social media engagement is becoming an increasingly important metric is measuring advertising’s success.