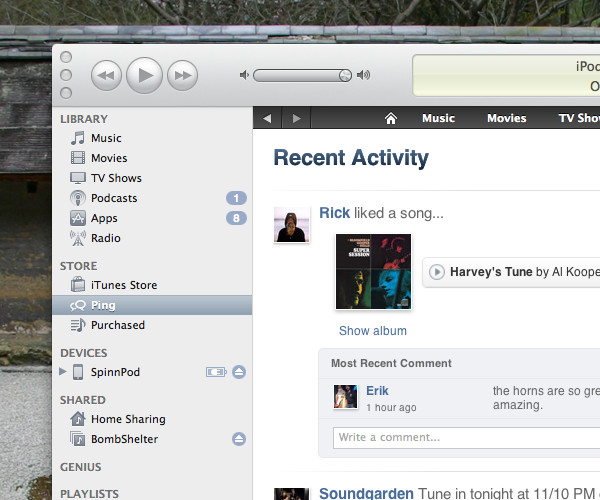 First off, let me just start by saying that this is a really, really good move for Apple and Twitter. While we talked about Ping’s need to integrate some other social network with its service, we have to admit that we were a bit surprised to see the partnership happen with Twitter instead of Facebook. Unlike others, though, we think this will have an impact.

The question, obviously, is one of who is benefitting here. While the service is somewhat compelling, it also holds a potential to be annoying to people who follow you. It seems obvious to us that Twitter, while kind, wouldn’t do this simply as a measure of being nice. There needs to be a benefit to Twitter for it to make sense.

We’ve been told, by Carolyn Penner of Twitter, that the benefit comes in the richer information that will be shared in the right side of the New Twitter. When someone Tweets any iTunes link (not only via Ping), it will provide more information in that right side as you can see here:

Beyond that, though, there has to be money involved. While Twitter won’t “comment on underlying financials behind partnerships”, it’s clear that Twitter is getting a cut of the money somehow. Here are the ways that we think it could happen:

Sales Share – For every time that I recommend a song on Ping, if someone follows that link on Twitter and then purchases the track, Twitter could get a small percentage of that sale.

User Increase – Seeing all of these Ping tweets is certainly going to raise some interest in the service. Undoubtedly, Apple has ways to track new users to the service who were referred via a Twitter link. Could Apple be paying Twitter for new users?

Straight Partnership – It could simply be a straight money deal between the two parties. Apple could be cutting a check to Twitter for integrating the service, with the added benefit of that enriched right side panel.

As of now, all we know is that the integration is very slick and that there’s a deal underneath it all. Kudos to Twitter and Apple on both accounts.

Read next: Tip: If Facebook launches an e-mail service, get your vanity URL now