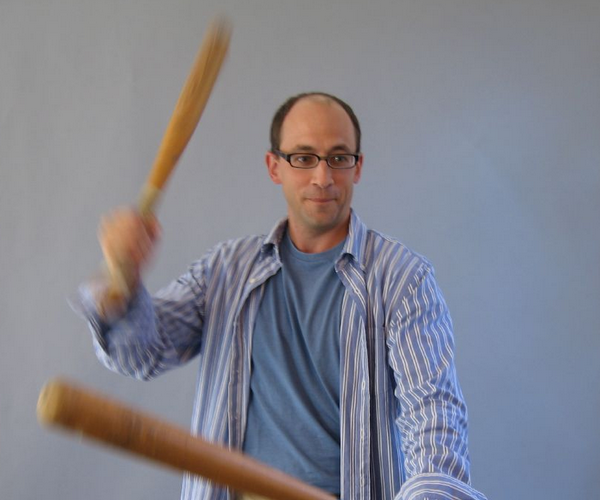 Oh Internet, we do so love you. The great thing about when someone’s name pops onto the radar is that we can start doing some Google searching to find out more about them. Dick Costolo, Twitter’s new CEO, is just the guy in question.

Costolo was a co-founder behind Feedburner, the now-famous RSS service that was eventually bought by Google. What did he do with that money? Why he set to investing in Twitter of course. After Google purchased Feedburner, Costolo went to work for Google as a Group Projects Manager in the Ads section.

And dance, and TV across four countries. He’s quite the established performer, having done shows at the Annoyance Theater in Chicago, as well as comedy shows in Edinburgh, Montreal and Australia.

Costolo, according to an article on CNet, was instrumental in bringing about the promoted tweets platform. Though it has since been scrapped, and promoted users have taken its place, there’s no denying Costolo’s importance to the revenue model for Twitter. The next step for Twitter’s revenue? That appears to be in tools for businesses to monitor and manage their Twitter accounts. Is Costolo aiming for HootSuite?

When Feedburner was caught spamming, Costolo was quick to own up to the fact. Though he did blame it on an entrepreneurial culture, where people are encouraged to work as they see fit, Costolo showed no fear in speaking his mind about the action itself. That sort of clarity should bode well for Twitter, moving forward, as we users often have unanswered questions about the how and why behind the service.

Costolo wasn’t really interested in joining Twitter. In fact, he turned down numerous offers. However, the more that he thought about it, the more he saw Twitter’s potential to be a “pivotal” internet company that he likened to Netscape, Google, Facebook and eBay. Over time, that pivotal factor weighed heavily and Costolo agreed to join long-time friend Evan Williams at Twitter in order to work for something that wasn’t just “another startup”.

He Has IPO Aspirations

From what we’re reading, Costolo is just the guy to take Twitter into its IPO. According to an article on Gawker, Costolo has been talking about Twitter going public for quite some time, as this was written in July of this year:

It’s lost on few Silicon Valley gossips that Costolo was denied the initial public stock offering he is said to have craved for his content distribution startup FeedBurner; he had to content himself with a private sale to Google for $100 million. With Twitter, at last, the serial startup founder has his shot at taking a company public.

It could be the best…or worst move for Twitter. There are arguments from both sides and only time or a filing will tell.

OK, maybe not evil, but it reads better that way. Need proof? Here it is, from his own fingers. Mind you, this tweet was from a year ago, but it’s highly relevant:

A tip of the hat to @Boris from the comments.

Read next: Apple TV Comes to Canada Without the TV part