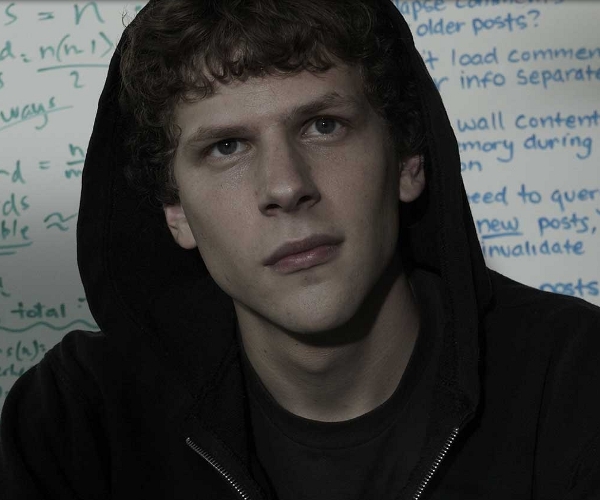 Perhaps the most anticipated entrepreneurial movie in a generation, David Fincher’s ‘The Social Network’ – a methodical though often funny account of the (supposed) struggle for control of Facebook – isn’t really about Facebook at all.

No, this film is about the man that forged Facebook into what it is today, CEO Mark Zuckerberg. Perhaps a better title would have been ‘The Curious Case Of Mark Zuckerberg’.

Going into this film, we expected something closer to Fincher’s ‘Zodiac’, where he captured an era (in that case the ’70’s), expecting the director to offer us a snapshot of the last seven years. However, that either isn’t the case, or it’s just too hard to look at a movie like this right now with 20-20 hindsight as we’re all still living it.

Facebook is still rapidly growing, it’s still a private company, and heck, most people are still on it. This isn’t a historical drama – this is more like a reality show in a way (or unreality show depending on what you believe) and ‘surreal’ is really the best term to use when watching this movie as the story is still evolving.

Of course, the Aaron Sorkin penned film has its tense and rich dialog, much of which is spoken in deposition hearings in various lawyers’ offices. The film also has an expected amount of heaviness from both Fincher’s direction and Trent Reznor’s score. However, all of that takes a firm back seat to the single-minded vision of Zuckerberg, and to a lesser extent Sean Parker.

Jesse Eisenberg’s portrayal of Zuckerberg is pretty dour – the only time he smiles is when Justin Timberlake’s Parker is convincing him to move to California. Zuckerberg in this film is not only dour, but sharp-tongued (again, it’s Sorkin, what do you expect?), brilliant, mature in many ways, and intent on avoiding all of the things that do not lead to success.

Is the portrayal accurate? We frankly have no idea. Will it change the public’s perception of Facebook’s CEO for the worse? We doubt it – Eisenberg makes Zuckerberg into a kind of kick-ass, take-no-prisoners visionary, and the likable actor really does have great comic timing, and while some people might think Zuckerberg sounds like a jerk after watching this movie, it’s hard not to respect this movie version of Zuckerberg. People (who have continued to come to Facebook in droves while all of the privacy issues have swirled around the company) will most likely not harbor a very negative view of Zuckerberg based on Eisenberg’s performance, but then again, stranger things have happened.

Also, this is not a movie that accurately portrays how hard it is to create a web service like Facebook. Yes, it does a good job of showing how an early stage company gains employees, but other than a couple of pleas from Zuckerberg for more money (and we’re talking hundreds of dollars here) to get better servers, there pretty much everything related to the creation of Facebook just moves from Zuckerberg’s brilliant mind to the keyboard to those servers. This movie isn’t about the technology trials of building a web company, and most likely, that would have been quite boring for most anyway.

Since the movie really kind of cuts off around the time that Facebook hit a million users, the film ends up focusing on the “Facebook is a great place to get laid” aspect of the early college days and skips the tremendous growth that the Facebook Platform, social gaming and other improvements that brought everyone and there grandmothers to set up accounts and spend countless hours per month on the site. Again, that probably wouldn’t have been all that exciting, but if people look back at this movie in 30 years (and we kind of think they will), that is an important part of the overall success story that is left out.

It’s also certainly not about how hard it is to raise money or the founder/investor relationship – in the movie Facebook receives half a million dollars before Zuckerberg even meets his investor (who happens to be Peter Thiel, who just today said he thinks $33 billion is cutting Facebook short). Nor is this movie an accurate depiction of Silicon Valley – it’s more like ‘Entourage: Silicon Valley’.

No, this movie is about the obsession needed to make a world changing company, with Zuckerberg as Luke and Parker as a kind of Silicon Valley Obi Wan Kenobi / Fast Eddie. Parker guides Zuckerberg to the promised land in the movie (while keeping his 7% of course) and all of the other pretenders to the Facebook throne eventually get shunted aside, one way or another (then settle out of court of course).

Is Zuckerberg a tragic character in this movie? No, not really. He certainly gives at least as hard as he takes. At the end of this movie, you get the feeling that Zuckerberg has definitively won, and that is probably the greatest truth of this film. Like him or not, believe this movie or not, it’s hard to argue that Zuckerberg isn’t the king of not only Facebook, but perhaps the Internet. Heck, maybe someday they’ll make a movie about all of this.

P.S. Big thanks to Mashable for setting up the screening in San Francisco!