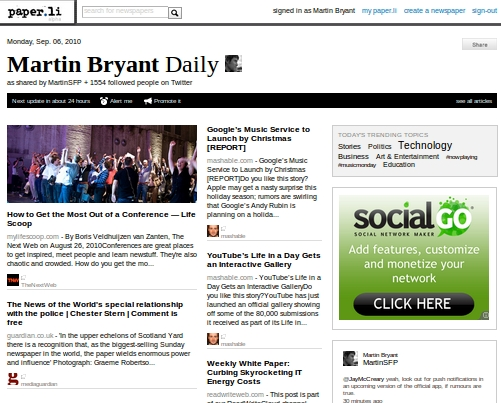 “Twitter newspaper” service Paper.li has changed the way its promotional tweets work after high profile Twitter users accused them of being little more than spam.

In case you’re unfamiliar with it, Paper.li a service that organises links from the people you follow on Twitter into a ‘newspaper-style’ web page. It can create a daily newspaper from any Twitter user, List or hashtag.

A nice idea, but its automatic tweets have proved a major annoyance for many. Tweets like “The John Smith Daily is out – featuring @user, @AnotherUser and @SomeoneElse” have become especially irritating for Twitter users with many followers. Why? Well, popular TV comedy writer Graham Linehan summed up the problem yesterday. Over a number of tweets he wrote:

Robert Scoble decried the tweets as “Spam” while our own Editor in Chief, Zee summed up his own frustration succinctly:

It’s easy to understand the annoyance of all your Twitter replies being mentions in online newspapers. Now the people behind Paper.li, SmallRivers, have acted to quell the bad feeling by changing their promotional tweets.

On the Paper.li blog today they write:

“We hear the complaints, and are looking into ways to satisfy paper.li users while reducing the spammy feeling for others. We are thus testing a new type of tweet. It doesn’t just say a daily is out – it shares the top story of the day. We believe such a tweet clearly conveys more interesting info for followers. It is quite close to a retweet really – so something that basically says: “this is relevant for me and the group of people I follow – you should probably read it too”.

The tweets are opt in, so auto-tweeting should be kept to a minimum and if they still annoy you, it’s the user, not the service that you can direct your anger at.

Read next: Is LinkedIn Checking Out?