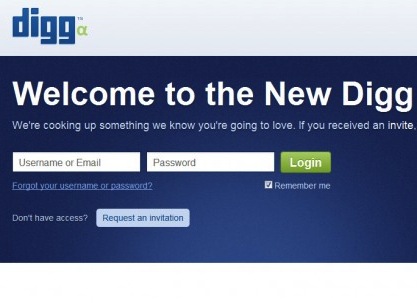 On August 25th, Digg launched its fourth new iteration of the site, bringing with it a revamped interface, new submission processes and a huge focus on social.

Unfortunately for it’s founder Kevin Rose, core Digg users felt that the changes suffocated its users, removing the very essence of Digg; to find and promote new and interesting stories. The RSS submission service for media platforms quickly resulted in the Top News listings being dominated by major publishers.

Our very own Alex Wilhelm listed a number of changes Kevin Rose and his team could implement to appease its existing users and continue to attract new visitors, as well as publishers. It appears that the team at Digg have been listening and its leader has taken to his blog to respond to the huge amount of feedback that must have come his way over the past few days.

In his blog post entitled “Digg v4: release, iterate, repeat.” Kevin Rose conceded that not everyone was happy with the new Digg but did mention that site usage “looks extremely good”, to the point that Digg registered 43,000+ users a day previous. He also addressed some of the requests to bring back features that were dropped for the new layout and shift of focus on Power Diggers, writing:

Some changes for the better but probably not enough to turn the Power Diggers’ frowns upside down. It appears there are still a huge amount of bugs in the new Digg that the team are no doubt working hard on quashing.

It wasn’t mentioned in Rose’s post but the Digg buttons are also getting a makeover, getting a specific mention in the comments. The new buttons are expected to go live in the next week, reducing redundant references to Digg’s when they could:

There will undoubtedly be a number of revisions pushed in the coming weeks, when Digg V3 went live many users complained but hung around long enough for them to be ironed out. We hope that the Digg team can reach a level of equilibrium with its users and the associated feedback, so it can continue to push new and interesting stories to its ever increasing userbase.

Read next: 5 Countries That Will or Have Banned BlackBerry