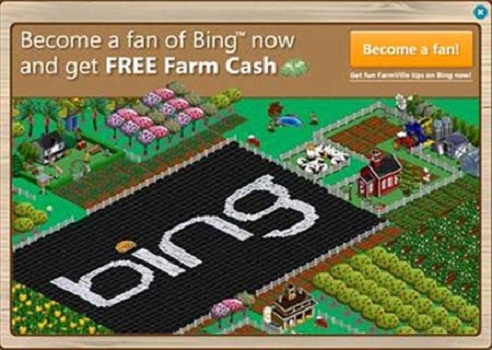 Remember back in 2007 when Microsoft invested $240 million into Facebook? I guess now we’re seeing another of the fruits of the Microsoft money. Facebook Places, the newest of the Facebook products, has just launched with Bing as its mapping service of choice.

However, it isn’t only an investment decision by Facebook, to be sure. What Facebook has done, in the placing of Bing, is solidify the walls of its garden away from competing Google products.

Obviously the list goes on with Facebook and Google having competing products, but these are the two that are immediately noticeable in the world of Facebook Places. Given Google’s propensity toward placing its own products high in view of search results, it only makes sense that Bing would be the map of choice for Places.

According to the Bing Blog, you’ll get a lovely Bing map whenever you use Facebook Places:

Just like that, the check-in will flow to your profile on Facebook.com complete with a Bing Map, a pin of your location and any commentary you’ve added to your check-in. Places also includes the ability to see where your friends have checked in, a link to get directions to a place (via Bing Maps) and a Like button for the respective place page.

Is it fair to call it a partnership yet? Honestly, no, it’s not. But the fact of it is that Microsoft has dumped a ton of money into Facebook. Facebook won’t bite the hand that feeds it and so Microsoft will likely continue to be the top products available in the Facebook world.