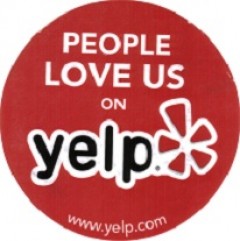 Groupon and LivingSocial should watch their backs, because there may be a new player in the deal-a-day market.

According to a post on Yelp’s community boards, Yelp is testing a daily deal feature in Sacramento, CA (coincidentally my hometown). The deals, which a Yelp Community Manager says the company is “testing…out for fun to see what kind of response it generates,” appear to operate much like Groupon’s daily deals.

The reason that Groupon should be concerned, though, is Yelp’s massive reach.Yelp has a huge user base. In May 2010, Yelp had over 32 million unique visitors, many times the amount of uniques that Groupon can boast. Yelp’s user base is also very dedicated to the service, due in no small part to the events and perks that Yelp offers its so-called Elite users.

Another feather in Yelp’s cap is its mobile app. It’s consistently one of the most popular apps on the App Store (and was one of the first Augmented Reality apps to hit the iPhone), and over 27% of searches on Yelp came from this app. This gives Yelp a huge platform to reach their users with these daily deals.

Most importantly, however, is Yelp’s existing arrangements with businesses. Part of the Groupon/LivingSocial ethos is getting the most for your money by leveraging collective buying power. Since Yelp has existing relationships with businesses across the US, most of which are quite positive, it will be able to negotiate amazing deals for its members in exchange for the uptick in business that a Yelp deal would likely bring.

Part of what will make the deals so powerful, though, is Yelp’s customer base. If Yelp set a minimum star-rating for businesses to offer deals, certain businesses could be inspired to improve service to get the extra business that such a deal would bring. At the same time, these deals provide a way for Yelp to reward dedicated users for their years of Yelping, checking in and rating.

In short, Groupon and LivingSocial should be on guard.  It looks like they’re going to face some tough competition in the future.

Thanks to Yipit for the tip.

Read next: Still thinking about it is a waste of time...