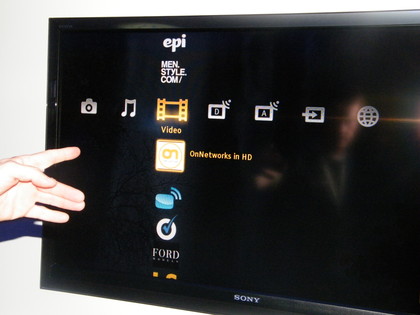 Yahoo! has announced that their TV widgets will now be available for Sony Bravia TVs in 100 countries.

This expands Yahoo!’s reach seven-fold according to the release, the new expanded partnership coming in addition to Samsung, LG, VIZIO and HiSense – meaning that Yahoo! Widgets are on 5 of the top 10 LCD TV manufacturers in the world, which is impressive.

We agree with NewTeeVee that this announcement comes less than a month after Sony’s CEO sat on stage with Google CEO Eric Schmidt to announce Google TV, so there is some confusion here as to where Sony is going with LCD Internet TV. While Yahoo! certainly has a strong early start in this race, Google has a much more extensive video catalog than Yahoo!, and that could be a major advantage when it is released. On the other hand, NewTeeVee also points out that Yahoo! Widgets seem to be much more lightweight than Google TV (lightweight as in computer hardware needed that is) so Yahoo! seemingly also has an advantage in that it can sit on lower-end TVs, whereas Google TV seems to be more for high-end TVs.

Yahoo! also faces competition from Microsoft’s Xbox, Apple TV and other platforms such as Boxee.

So what is the future here for Yahoo!? Well, first of all, the early start is a big advantage, and frankly, Yahoo! has shown that their widgets work and are reasonably popular. Most likely, Yahoo!’s Widgets will continue to be integrated into TVs, possibly even in conjunction with other platforms, including Google TV.

If market research shows that users would like to have Internet TV browsing options, then it is possible that TVs will include a dashboard page where users can click on either Yahoo! or Google TV or Netflix or Boxee or Hulu or whatever and then browse from that interface. Conversely, manufacturers may just decide to go with only one Internet TV interface, and then we’ll see which platform starts to take over.

Read next: The Sun shows how NOT to work with bloggers