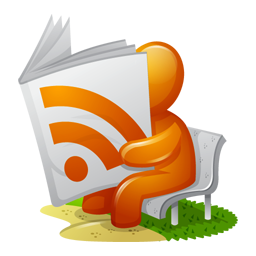 As I wrote yesterday, the iPad is dominating, it’s a changing the way people consume online content and as everyone by now has heard, Old Media has been latching onto the iPad with the hope that it will be a lifeboat. However, I’m not going to get into the “can the iPad save Old Media” discussion here – nearly every angle in that discussion has been hashed out already. No, I’m going to focus instead on another medium that some consider to be “dying” – RSS.

First of all, let’s take a second to touch on “the death of RSS” conversation that somewhat raged last year at the hight of the Twitter frenzy. Basically, the argument (brought to the forefront by Steve Gillmor) for the death of RSS went/goes something like this: Twitter, and especially Twitter-focused clients do a much better job of not only doing exactly what RSS does, but adds another layer on top because retweeting (especially by people that a user follows) of a link pushes the most interesting content to the top.

Some of the arguments against the death of RSS include: RSS is a vital part of distributing content across the Web; people continue to sign up for RSS feeds, so they can’t be dead; RSS is built on open standards and Twitter is a proprietary system, so open = better. The fight against the perception of the death of RSS has mostly been lead by Dave Winer, often referred to as the “father of RSS”.

Here’s my take: while Twitter is a great way to find new content and catch the most important stories, having a comprehensive RSS feed has its advantages. First of all, not all blogs have a bot set up to auto generate tweets when they post, meaning that often either posts come up on Twitter slower or not at all.

This is why Twitter Lists don’t really work all that well as a pure RSS feed replacement. However, even if you’re not a big fan of Lists in their present form, they do almost meet this need, especially for popular blog feeds, which has sped up the bleeding of RSS (Lists were introduced only last November, many months after the “death of RSS” debate had already begun).

If only there was a device…

So in my opinion, RSS still has some value that Twitter just hasn’t quite yet matched. That said, I almost never read feeds because I find consuming them on my laptop to be tedious. Maybe I just don’t have time to sit and read all of those stories while I sit at my desk. Maybe I’m just not comfortable enough. If only I could read all those RSS feeds lying down on the couch, or out on the grass…

As it seems with all media, RSS may find new life on the iPad. While we haven’t found any killer RSS apps yet (there may very well be one already, please let us know in the comments), the potential for one is honestly pretty low hanging fruit.

For example, an app that shows your feed from Google Reader (or wherever) in a left hand column in landscape mode and then (quickly) loads the story you click into a larger column to the right, plus seamless sharing integration (Twitter, Facebook, Digg, etc) and RSS could be fun again. Perhaps even offer the option of importing Twitter Lists right into the app, so that there is no need to jump back into Twitter for your news. Of course, another option would be to bring in Google Reader into an iPad Twitter client such as Twitteriffic.

Hard to add feeds on the iPad

On the downside, however, one of the things that isn’t easy to do with the iPad is subscribing to feeds (iPad Safari + lack of multi-tasking makes it tougher than it should be) so to make a well rounded solution to encourage the consumption of feeds, it would help if either Apple or a developer could make this a lot easier.

So if this low-hanging-fruit-RSS-iPad-app suddenly materializes, will it arrive in time or will it be too late to save a popular publishing medium that at one point seemed like the de-facto way to consume the news? Sound familiar? Of course it does, but to be fair to RSS, RSS was born of the Web, publishes instantaneously, and can easily be integrated into an app. That pedigree gives it a real fighting chance on the iPad if a developer or two can make some really compelling reading experiences out of that little ubiquitous radio button that sits on millions of websites.

Read next: How To Troll BP In Their Own House