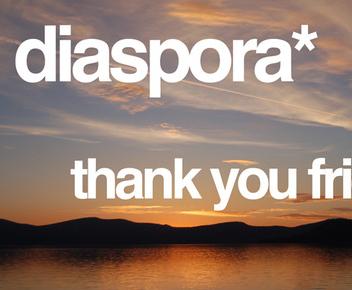 To begin, congratulations to the Diaspora* team on their initial fundraising success. I fully appreciate the sentiment behind their project; they have touched a nerve among the thousands of people who feel jilted by Facebook’s recent actions.

That said, the idea behind Diaspora* (its implementation) is overly complex and won’t work for the large majority of Facebook users. That is not to say that there is no problem to fix, as we’ve seen online privacy is being eroded by Facebook at wicked speed. New Facebook users don’t understand how the site’s privacy settings work, and are thus overly exposed from their first day on Facebook on. Facebook does little to help them.

As Facebook finds its legs among the older and less technologically inclined, it needs serious competition to force it to abdicate its new system of assumed openness. When Diaspora* was announced, it garnered press, excitement, and over $100,000 in funding  because people understand that. No one wants to let Zuckerberg decide the future of online privacy by himself. Given all of that, how does this Diaspora* work, and how well will it be received?

Diaspora* gives its users privacy by forcing them to host their own node that contains their information. If the company does not have access to your data, it can hardly infringe on your privacy. In Diaspora*’s words:

Diaspora* aims to be a distributed network, where totally separate computers connect to each other directly, will let us connect without surrendering our privacy. We call these computers ‘seeds’. A seed is owned by you, hosted by you, or on a rented server.

The seed is an aggregator that will gather your content from around the internet into a central location, your server. Link your seed to my seed and we can share and converse. Exactly what the connection will do between the seeds is yet to be fully fleshed out.

In short, you host your own profile that is a amalgamation of your life online, and share with a select group of people.

This Is Too Complex

Not to say that hosting a personal FriendFeed and attempting to link it to my friends and their own FriendFeeds does not sound like fun, but it would be mind-numbingly tedious for most. The friction to get started is far too high for this project to ever gain real traction.

“But wait,” you may cry,” if the company has raised so much money why is its idea untenable?” It’s simple. People are mad at Facebook and they wanted to vent. They blew off steam by throwing dollars into the Diaspora* project.

Your parents probably recently joined Facebook. It must have been a hellish weekend walking them through the website and teaching them how it works. Imagine trying to get them to set up their own server to join Diaspora*. We technology minded people would find it a fun challenge, for everyone else it is a joke to even consider.

The Simple Solution Is Not

Diaspora* hopes to alleviate the tension that I just outlined by letting people rent space on communal servers. All the technological problems are therefore moot, and Diaspora* has a chance, right?

Not at all. By moving the data to a server that you are renting part of to host your seed, you are losing the whole point of Diaspora*: control over your data. Fine then, you might say, let the company rent server time to its users thus ending the fear of letting a sketchy company control your seed. That is another non-starter. Diaspora* does not want to control your data, and you do not want to afford them the ability to do so. If you want full privacy, you cannot let Diaspora* host your seed.

You either take the time and headache of setting up your own server, or you violate the core point of Diaspora* and pay someone else to handle that work for you. Either way, something is not right.

If they cannot handle the tech problem of setting up their own seed server, and are content to live with someone having their data, users still have to pay to have their seed hosted. In short, they have to pay for what they used to get for free, all the while not solving the problem they set out to do. Even more, if I am paying for hosting the more I use the host the more I have to pay. In short, the more I use Diaspora*, the larger the bills I might be on the hook for.

What is the value proposition?

Disapora* has the right drive, but the wrong vision. The good news is that the team will have more than $100,000 to work with this summer. They can fine tune and refine their idea to make it something that we would use.

Facebook needs to be taken down a peg, and these might be the guys to do it. With proper guidance their enthusiasm could become a social revolution. Good luck guys.