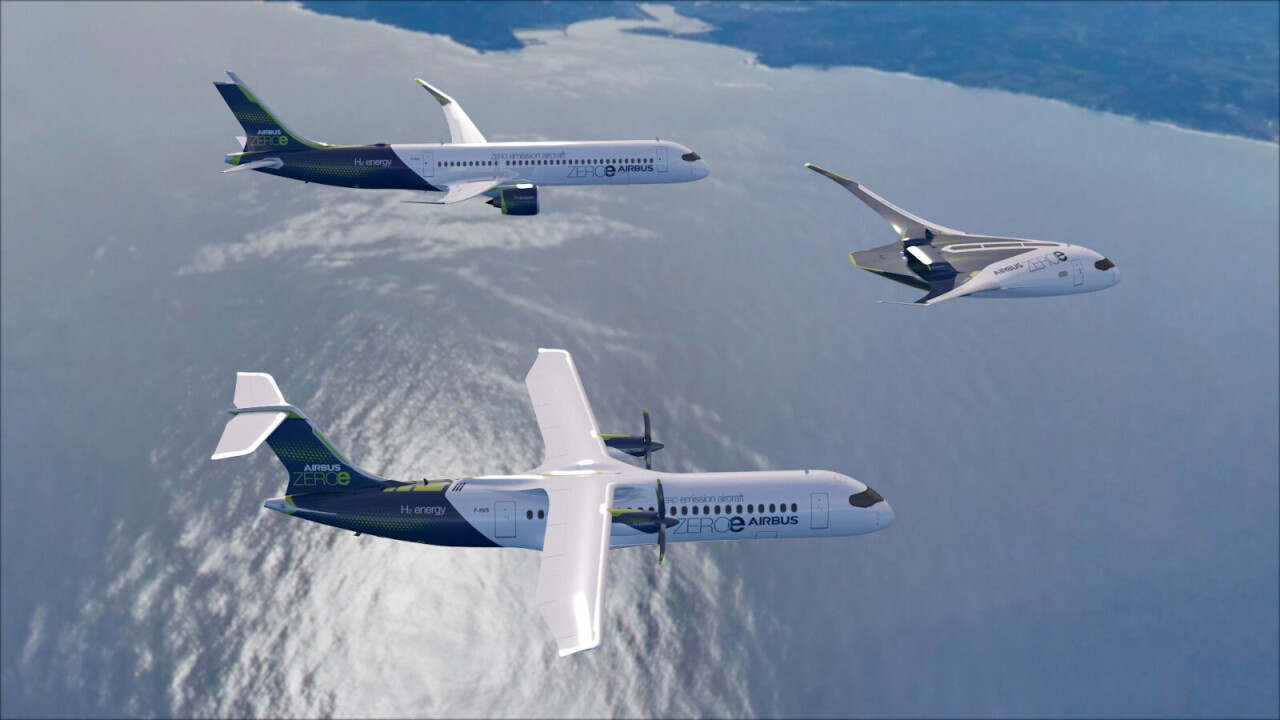 Yesterday, aviation giant Airbus unveiled three new concept airplanes that use hydrogen, not kerosene, to fly. The innovations come as part of the company’s push toward reducing aircraft emissions, but their success relies heavily on infrastructure and support from airports.

Airbus’ three concepts, all code-named ZEROe, use Turbofans or Turboprops which are similar to conventional airplane propulsion methods but instead burn hydrogen in modified gas turbine engines. Airbus hopes it can encourage a tectonic industry shift toward new types of fuel that reduce emissions. It plans to put these planes in the skies by 2035, which is, um, not that far away.

There’s a jet-like mode that’s capable of carrying up to 200 passengers as far as 2,000 nautical miles (2,300 miles). This one is powered by Turbofans that combust hydrogen stored in the rear pressure bulkhead. Airbus says this would be the choice of craft for transcontinental travel.

There’s also a propeller driven model, which is powered by Turboprops, this model should be able to carry up to 100 passengers, and will supposedly be capable of travelling 1,000 nautical miles (1,150 miles). In other words, this is the preferred choice for short-haul trips.

The most futuristic, out-there design is what Airbus calls a “blended-wing design.” It will use a similar propulsion method as the Turbofan design, but is far more striking in its appearance. It’s got an essence of the Lockheed F-117 Nighthawk about it, in that it’s hard to say where the wings stop and the fuselage begins.

According to an Airbus engineer cited by Bloomberg, the blended-wing design will be the most challenging to produce and develop.

“The concepts we unveil today offer the world a glimpse of our ambition to drive a bold vision for the future of zero-emission flight,” said Guillaume Faury, Airbus CEO. “I strongly believe that the use of hydrogen — both in synthetic fuels and as a primary power source for commercial aircraft — has the potential to significantly reduce aviation‘s climate impact.”

At the unveiling, Glenn Llewellyn, head of zero emissions aircraft at Airbus, was critical of battery technology, saying that it wasn’t developing at the rate the aerospace industry needs.

“The challenge when we really go to larger commercial aircraft like applications we see the need for hydrogen, there is far more times energy needed. Batteries are just not improving at the rate we need,” he said.

“To meet the climate change agreement there needs to be impressive implementation of renewable energy and hydrogen,” Llewellyn added.

Realistically though, hydrogen has a number of benefits over battery electric power, in that refueling a plane can take minutes not hours, and when the fuel is used you’re not carrying dead weight in the form of batteries.

Airbus’ dreams of the future are all well and good, but the whole success of these aircraft and whether they can operate at all depends on the industry embracing the concept and providing hydrogen infrastructure.

“Developing a hydrogen aircraft on that timeline will be a real challenge because of the massive amounts of infrastructure and government investment required,” Bloomberg’s Charlotte Ryan writes.

Airbus has reportedly already started talking with airports, other airlines, and energy providers. The company is also calling on governments to offer incentives that will encourage an industry-wide shift to hydrogen power, these could include financial kickbacks for retiring old planes and investing in new h-powered versions.

This might not be as challenging as it sounds, Airbus has close ties to German and French government as those two countries are the company’s largest shareholders and have put some $2.9 billion towards development of clean propulsion systems.

“The transition to hydrogen, as the primary power source for these concept planes, will require decisive action from the entire aviation ecosystem,” said Faury.

It seems two of the main players in the industry — aircraft makers and governments — have their priorities aligned. Now we just need the airports to get on board.