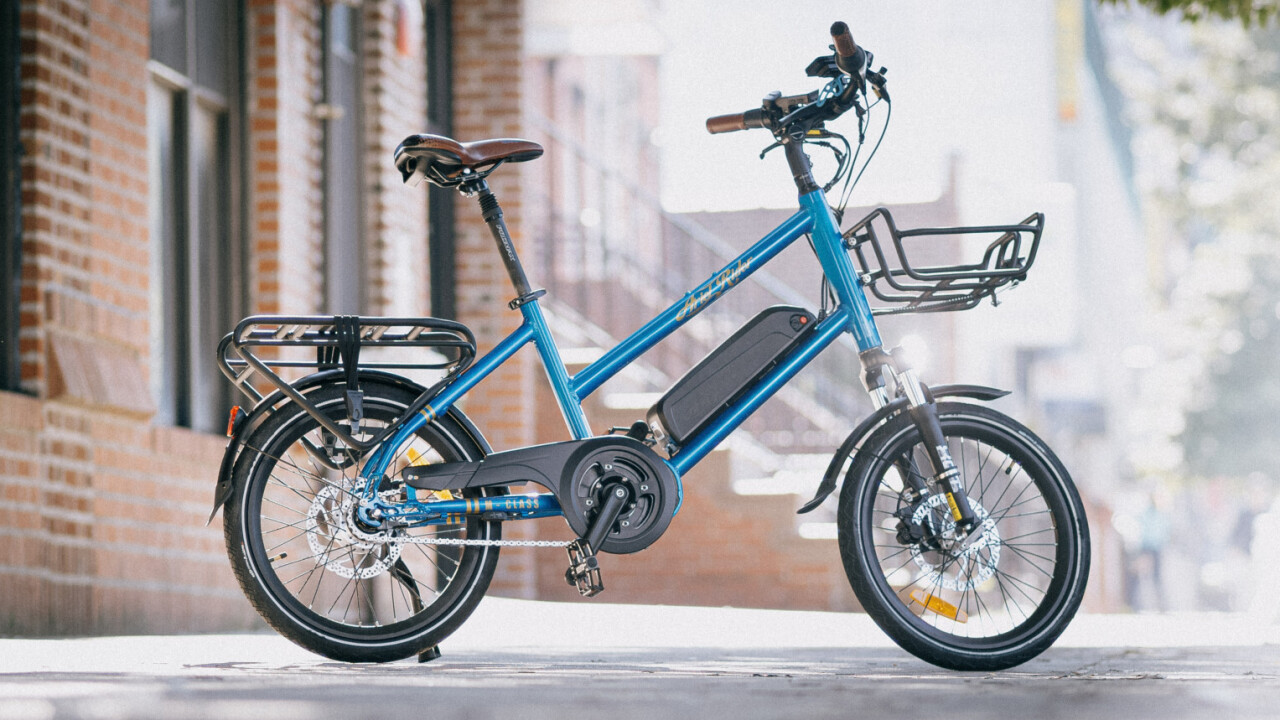 Most ebikes are just too big.

At least, that’s how I always feel whenever I get a new ebike to review. They arrive in a giant box, take up too much space in a small Brooklyn apartment, and are a pain to maneuver around narrow hallways. This is compounded by the fact many ebikes under $2,000 weigh over 60 pounds, at least if you want decent battery capacity and powerful motor.

Mind you, I’m 6 feet tall, so it’s not that I need a smaller bike. I just appreciate the practicality. That’s why I’ve come to love Ariel Rider‘s M-Class, a compact electric bike with 20″ wheels and solid cargo capabilities.

While most people’s idea of a compact electric bike involves folding, these bikes tend to come with weak motors and small batteries. They usually aren’t built for cargo either, and the better ones are also often woefully expensive.

The Ariel Rider M-Class doesn’t fold, but it’s still much smaller than the typical 26-29″ wheel bike, while sacrificing virtually none of the power or utility. In fact, at $1,649 (available in the US only), its spec sheet almost seems too good to be true.

Notably, the M-Class is one of few ebikes with a mid-drive motor for under $2,000. Unlike the hub motors used on most affordable ebikes, which apply torque directly to your rear (or occasionally, front) wheel, a mid-drive motor is mounted between the pedals and turns your bike’s chain instead. This provides more responsive assistance and an improved center of gravity, yielding an all-around more natural-feeling ride. Moreover, mid-drives tend to be easier on the battery than hub motors of similar wattage because they can leverage your bike’s gears. These reasons and more are why the big-name bike brands use mid-drive motors almost exclusively.

Granted, the new Tongsheng motor in the 2020 version of the M-Class — which replaces the prior model’s Dapu motor — doesn’t have the brand reputation or dealer support that Bosch, Shimano, Yamaha, or Brose do. Nor are parts as easy to find as the popular budget models from Bafang. But at a claimed 98 Nm of torque, 500W of power, and a 28mph max speed, it’s also more powerful than most of the competition (even if that torque figure is probably a little exaggerated).

Mid-drive aside, the M-Class has much else going for it at the price:

There’s little I’d change without increasing the price — but more on this later. The M-Class doesn’t feature the fanciest components you can find on a bike, but it packs a ton of functionality at this or any price.

Given it uses mostly standard parts, the M-Class isn’t as polished as, say, a Vanmoof or Cowboy, with their proprietary components. But it’s still unique;  the compact frame garners attention by virtue of its size, and I dig the vibrant metallic blue of my review unit (Ariel Rider even includes some touch-up paint for scratches). On several occasions, fellow cyclists complimented or inquired about the bike while stopped in the bike lane.

There are some concessions made for the price point, of course. The external battery screams ‘ebike!’ but I’ll gladly take a standard removable battery over a fixed integrated one (the M-Class uses a very common ‘shark’ battery). The fenders attach to the suspension fork via P-clamps, which is a bit too DIY-looking for my tastes, but I’ll also take it over the rigid fork on last year’s model. My one real complaint about the design is that I don’t like the faux-leather saddle or grips, but those are things I pretty much always replace anyway.

Less of a complaint more of a suggestion: Given the emphasis on compactness, I would’ve liked to see some way to fold the handlebars parallel to the front wheel, as seen on other (admittedly more expensive) bikes, like the Tern HSD/GSD, Wallerang Tjugo, or Cube Compact. As I found when reviewing the Revelo Thinstem, this goes a long way towards making even full-size bikes much less of a pain to store in an apartment.

Still, the handlebars are narrower than most, so this isn’t a huge deal. And if you’re handy and don’t mind the additional expense, you can always add this functionality yourself.

One pleasant surprise on the compactness front: the M-Class can stand up vertically to occupy a smaller footprint (assuming you have the rear rack installed).

Funnily enough, Ariel Rider tells me this wasn’t done on purpose, so maybe you shouldn’t store the bike this way. It’s not ideal, as the fender gets a little squished and it’s not quite so stable I’d be comfortable leaving it upright somewhere my pets have access to. However, it did mean I was able to store the bike in a large closet rather than my entryway, saving me a lot of clutter.

But my favorite thing about the M-class might actually be the ride experience. This little ebike has tons of power and doesn’t seem to care that I’m a 250+ lb rider. The torquey motor gets a mechanical advantage from the small wheels too; combine that with the fact the mid-drive motor leverages your gearing and the M-class accelerates to cruising speed from a dead stop faster than any ebike I’ve tested so far.

The motor achieves this while being quieter than most high-torque e-bikes too. And while on previous versions of the bike the throttle only worked with the pedal-assist set to zero, the new motor allows the throttle to function at any level, meaning you can quickly switch between pedaling and throttle at a whim.

The Tonghseng motor allows this ebike to demolish hills, even when carrying a few weeks’ worth of groceries on the sturdy front rack and a Burley Travoy trailer. The mid-drive’s torque and gearing support mean that going up steep hills is a noticeably easier experience than even the 750W Juiced CrossCurrent X that’s been my daily driver for months. And when going down a hill, the large 180mm rotors mounted on such small wheels give the M class some of the best stopping power I’ve seen on an ebike.

Power aside, the M-class is just plain fun to ride. Something about the small wheels and low center of gravity strikes a great balance between agility and stability, and the compact frame and narrow handlebars make it easy to weave between cars on busy city streets.

The combination of an internal gear hub and shift detection works beautifully for erratic city riding too. The internal gears allow you to shift while stopped at a red light, and the shift sensor added with this year’s model cuts out motor power while changing gears to avoid strain on the hub (and the associated annoying ‘clunks). The combo works seamlessly, and I miss it every time I switch back to a bike with a derailleur.

Thanks to the front and seat suspension, I also never found myself longing for larger wheels riding over a hundred miles of poorly maintained city streets. After adjusting the pre-load on the suspension fork and seat post, the M-class largely ate up the potholes I couldn’t avoid. Switching to a better suspension seat post, like the Redshift suspension post, improved the ride further, but the stock ride is still more comfortable than the suspension-less bike with larger tires I’ve ridden without being too ‘mushy.’

Despite the power available, the range is also impressive. Riding mostly in assist level 3 on relatively flat roads with stop-and-go traffic, pedaling a decent amount with minimal throttle usage, I was able to achieve about 20 miles with 2/5 ticks of the battery down. If you don’t mind pedaling the whole way on lower levels of assist, going over 50 miles on a charge seems completely viable. If you use the throttle all the time, your range will suffer dramatically, but that’s par for the course.

Another bonus is that because the M-Class uses shark-style batteries, you can easily find replacements and backups online; there are some battery packs nearly twice the capacity if you’re so inclined. And as with any ebike, the M-class still rides well enough to make it home if the battery runs out (as long as the road home isn’t too hilly). If anything, the M-Class is better at this than most, since it’s fairly lightweight (for a cheap-ish ebike), and the small wheels make it easier to accelerate from a stop.

It’s not all perfect though. For one, the bike might actually have a little too much power. Although there are 5 levels of assist (plus a lights-on but motor off ‘zero’ setting), I wish the motor were more conservative in assist level 1.

For another, despite the power available and 28mph limit, the bike isn’t really geared for high speeds. I can just about get up to 28mph with effort, but the bike requires a higher cadence than I’d like after about 23mph.

To improve the gearing, at least one rider has swapped the front chainring for a larger one, and I’d be tempted to do the same. Alternatively, if you’re willing to make a bigger investment, you could always swap out the Nexus hub for something with a wider gear range. But I hope Ariel Rider considers changing the stock setup for its next update. With the assistance of a motor, I rarely felt the need to drop below gear 4, even going up some pretty steep hills.

Other than gearing, I’d also swap the tires. Fixing a flat is easier on a mid-drive than on your typical hub motor, but I’d still like to see more reputable tires for peace of mind. Ariel Rider did tell me it plans to offer tires with puncture protection next year, but in the meantime, I’d opt for the ever-reliable Schwalbe Marathons for about 30 bucks apiece.

The M-class is the type of product I most enjoy reviewing: thoughtfully designed, versatile, and reasonably priced.

It checks off almost everything I want in an ebike. It’s compact, it has a mid-drive, it has oodles of power, it looks good, it’s under 60 pounds, and its parts are largely customizable and replaceable.

As with any internet-direct bike company, you’ll want to take exercise some caution before purchasing; you won’t get the same support you’d get from a dealer, nor the peace of mind of buying from a more established brand. You might have to wait longer for parts. And though Ariel Rider said it switched motor manufacturers to improve reliability, my primary concern would still be whether I could get the motor fixed a decade from now.

But while there are fancier, more expensive compact ebikes on the market, they have compromises of their own. Throughout my review, I kept thinking Ariel Rider could get away with pricing the bike over $2,000, and it’d still feel like a good deal. In case it’s not clear by now, I love this little ebike; whatever your budget, I can’t recommend the M-class enough.