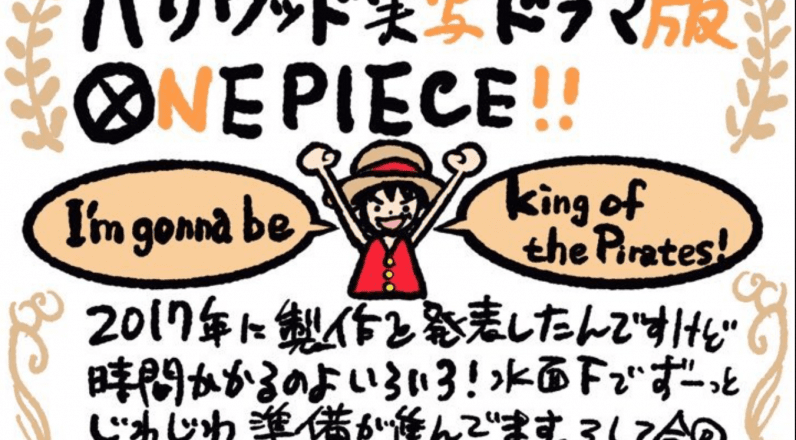 In the world of anime and manga, there’s no franchise more enduring than Eichiro Oda‘s One Piece. Both show and comic have been running for over twenty years, maintaining remarkably consistent quality throughout. To that point, the story’s current arc is one of the series’ very best.

So when Netflix announced it was adapting the story into a live-action series yesterday I was a little concerned. The history of live-action anime adaptations is… not good. The fact that the series has avoided one so far is something I considered a blessing, not a curse.

BIG ANNOUNCEMENT: A One Piece live action is in the works! @OnePieceNetflix pic.twitter.com/gnuR5JgmXw

It’s worth noting, Oda first announced a live-action adaptation in 2017, but it’s the Netflix involvement that’s new. Oda also notes the first season will last 10 episodes, and that we should “stay tuned” for casting announcements.

Considering the disasters of past live-action adaptations including Dragon Ball, Death Note, Ghost in the Shell, and Attack on Titan, I think I have reason to be concerned. The internet doesn’t seem particularly thrilled either:

My reaction to this news pic.twitter.com/HcOXpngTTU

However, there is hope. Oda appears to be deeply involved in the process and had previously denied live-action adaptation requests until he found the right fit to ensure quality. If we’re lucky, the One Piece adaptation may be an exception to the rule.