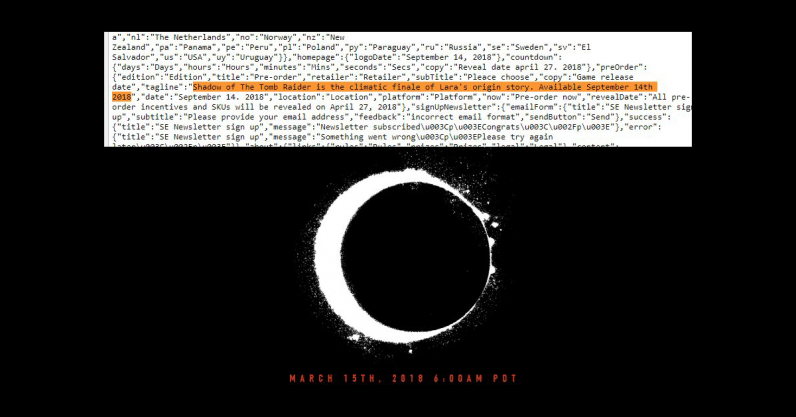 This is an excellent lesson in how not to do an online promo campaign. Gaming studio Square Enix updated the official Tomb Raider website to tease an upcoming announcement for the new Shadow of the Tomb Raider sequel – but not without accidentally leaking the secret announcement way ahead of time.

As spotted by sharp-eyed enthusiasts on Twitter, the company left crucial information about the upcoming announcement in the source code of the updated website.

While the site’s landing page currently teases a cryptic announcement slated for March 15, the information was readily available to anyone technical enough to rummage through the source code.

Indeed, some users have already noticed Square Enix has revealed the official launch date for the game is September 14.

Shadow Of The Tomb Raider will be launched September 14th, lol pic.twitter.com/EJAiNbVWxH

The last instalment from the ultra-popular series – Rise of the Tomb Raider – came out three years ago in 2015, earning fairly positive reviews across the board.

So there you have it: the all-new Shadow of the Tomb Raider sequel will drop on September 14 this year. Make sure to tune in for the official announcement tomorrow to get the rest of the details. Or alternatively you can tune in for the big reveal on April 27:

Other interesting tidbits from the website's source code: