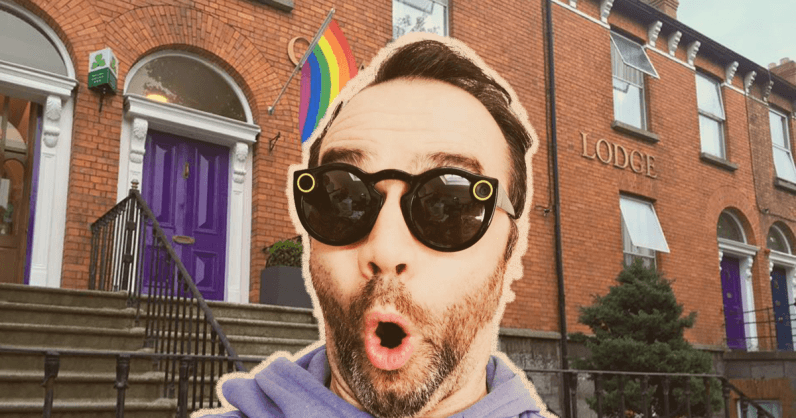 An Irish hotel has banned bloggers and other influencers after a 22-year-old YouTuber broke down in tears when she was refused free accomodation.

My partner and I are planning to come to Dublin for an early Valentine’s Day weekend from Feb 8th to 12th to explore the area.

As I was searching for places to stay, I came across your stunning hotel and would love to feature you in my YouTube videos/dedicated Instagram stories/posts to bring traffic to your hotel and recommend others to book up in return for free accommodation.

Before ending the email, Darby again attempted to sell Charleville Lodge on the benefits of providing free accomodations to influencers by dropping a mention of a similar collaboration with Universal Orlando the previous year. “It’s been amazing for them,” she said.

Obviously Darby didn’t know who she was dealing with.

The hotel has made a name for itself in creating some truly great viral content, like this. Or how about these “do not disturb” door hangers?  Its policy on breastfeeding (possibly NSFW, if you work for morons)? Or, there’s my favorite: this “promo” video (below) that has me dying to stay there next time I’m in Dublin.

I’ll be paying for my accommodation, however.

Dubbed, “bloggergate,” the hotel’s social media accounts have had some fun with the fiasco, and with Darby herself, this week including this response:

Dear Social Influencer (I know your name but apparently it’s not important to use names),

Thank you for your email looking for free accommodation in return for exposure. It takes a lot of balls to send an email like that, if not much self-respect and dignity.

Lucky for us, we too have a significant social media following. We have 186k followers on our two Facebook pages, an estimated 80k on our Snapchat, 32k on Instagram and a paltry 12k on our Twitter, but Jesus Christ, I would never in a million years ask anyone for anything for free. I also blog a bit (www.paulvstenson.com), which as far as I’m aware is another way of saying “write stuff on the internet”. The above stats do not make me any better than anyone else or afford me the right to not pay for something everyone else has to pay for.

In future, I’d advise you to offer to pay your way like everyone else, and if the hotel in question believes your coverage will help them, maybe they’ll give you a complimentary upgrade to a suite. This would show more self-respect on your part and, let’s face it, it would be less embarrassing for you. Here is a little video I produced which you may learn from: http://bit.ly/2mKTDTD

Hotel owner Paul Stenson’s response is the type best read in front of a fireplace with Morgan Freeman narrating. Slow, soft music would build to a crescendo before dropping out to silence as Freeman deadpans to the camera and delivers the “P.S. The answer is no.” line.

I could have happily slid into the weekend on that note, but the drama didn’t end there.

As is often the case, Darby made the problem so much worse by responding, stating she felt “exposed,” “embarrassed,” and “angry” at the response in a YouTube video.

The sense of entitlement is strong with this one. So strong, in fact, that Darby’s follow-up video might even be more cringeworthy than the public shaming she took on Facebook. But nobody tells the story better than Darby, so we’ll let her do the talking:

The response, coupled with a bit of backlash from other bloggers and so-called influencers, led the hotel to enact a new policy, thereby banning bloggers and social media personalities from the premises.

We reached out for comment about whether the hotel and cafe actually intended to follow through on the ban, and if Stenson had further comment about the whole bloggergate fiasco.

We’re not expecting a response…

Read next: Stop doing this.