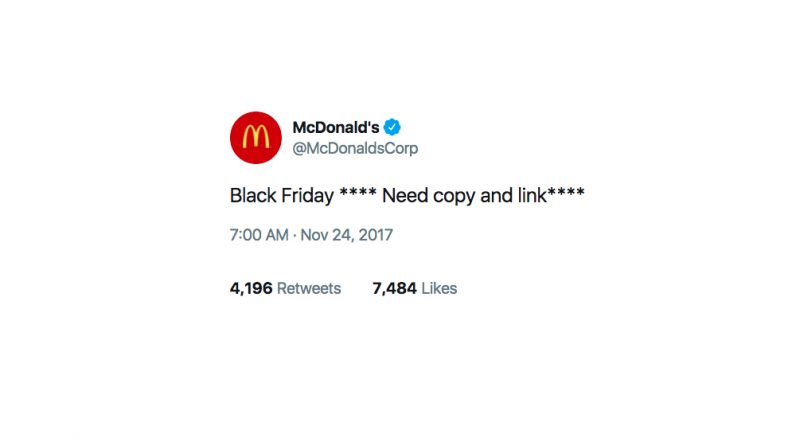 Aren’t you guys lovin’ it when McDonald’s messes up? The popular fast food restaurant chain was planning to announce some special promos for Black Friday on its Twitter account… but it seems some distracted social media employee forgot to actually include the special deals in the tweet.

Instead, the botched post simply read “Black Friday” followed by a reminder (“Need copy and link”) to include the promo content before scheduling the tweet – but it’s safe someone forgot to do their part. The equivalent of this blunder would be to serve a Big Mac without the patty and the cheddar.

In the three hours since it initially fired, the tweet has been retweeted over 5,000 times and liked more than 9,000 times.

The best part about this gaffe is that the tweet is still up:

What makes this situation even more amusing is this is hardly the first time the fast food heavyweight has effed up on Twitter.

Earlier this year in March, a ballsy social media employee tweeted at President Donald Trump from the official McDonald’s account, telling the US commander-in-chief he makes for a “disgusting excuse of a President.”

The tweet then went on to laud Barack Obama for his service as the President of the US and also mocked Trump for his “tiny hands.”

As you can expect, the Trump diss tweet went viral pretty swiftly until it was eventually deleted. For some reason though, McDonald’s is yet to purge the Black Friday flub-up. Of course, there’s always a small chance the tweet was a viral stunt, but hey – it’s much more entertaining to think it was a mistake.

Go make fun of it while it’s still there.

Update: McDonald’s has bounced back from this little howler with style. Here’s their reply:

When you tweet before your first cup of McCafé… Nothing comes before coffee. pic.twitter.com/aPJ2ZupS9b

Read next: Xiaomi’s noise-canceling earbuds are the best USB-C accessory under $50