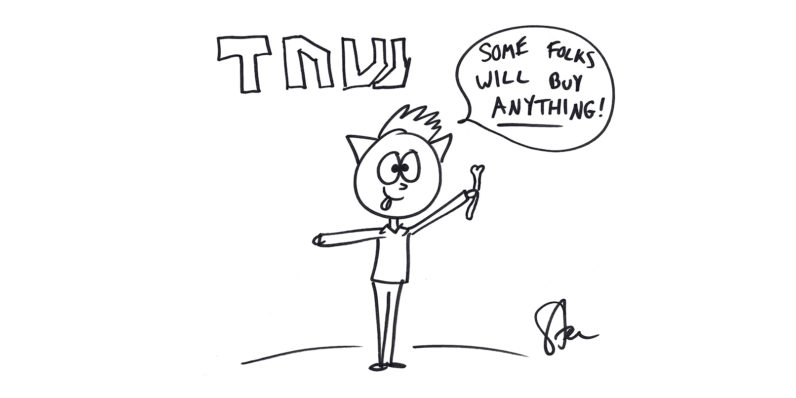 When you go on TV and pitch the uber-rich to obtain financing for your stick figure cat drawing business, you’ve got moxie. Steve Gadlin, best known for his partnership with Mark Cuban on Shark Tank — or perhaps the “I want to draw a cat for you” jingle — is at it again.

This time, he wants to sell you a raccoon penis.

Gadlin, for some reason, has an inventory of 1,000 raccoon penis bones. I’m not going to ask why or how he obtained such a collection, because I fear the answer. But, for those who feel life is incomplete without the sex organ of a scavenging mammal, Gadlin has you covered. In an attempt to finance the third season of his cable access TV program, he’s selling off 1,000 raccoon penis bones on Kickstarter.

If you’re game, you can grab a penis bone on Kickstarter for as little as $10 if you act quickly. The price goes up once inventory at each level sells out. I can’t imagine why anyone would want a raccoon penis bone, so of course we purchased one. We’ll let you know how it turns out.

Update: The campaign was suspended by Kickstarter for violating its terms. Now we’ll never get a raccoon penis in a plastic tube. 😔

Read next: Naval expo turns to techies for future of war