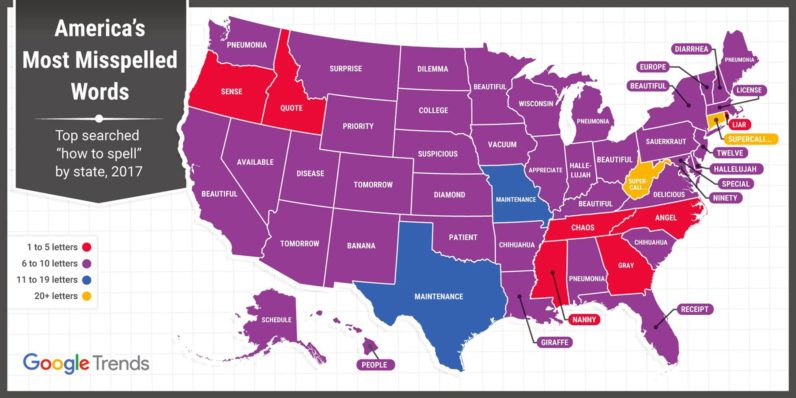 Google recently released a map showing “America’s Most Misspelled Words” based on searches containing “how to spell” and then a keyword (presumably misspelled).

America's most misspelled words – it's #spellingbee week and we mapped top "how to spell" searches by state#dataviz pic.twitter.com/oHkRHj8Eku

The data, for the most part, isn’t all that surprising. South Dakota can’t spell “college” (so many jokes to be made here), Pennsylvania can’t spell “sauerkraut” (but neither can anyone else) and North Carolina — right in the thick of the bible belt — can’t spell “angel.”

And then there’s Wisconsin.

Wisconsin residents, according to Google Trend data, have difficulty spelling the name of the state they reside in. Awkward. I mean, I’d understand it if you lived in Tennessee, or perhaps Massachussetts, but Wisconsin?

Aside from Wisconsin’s failings, we have the Louisiana mystery. In Louisiana, the most-misspelled word is “giraffe.” I have so many questions.