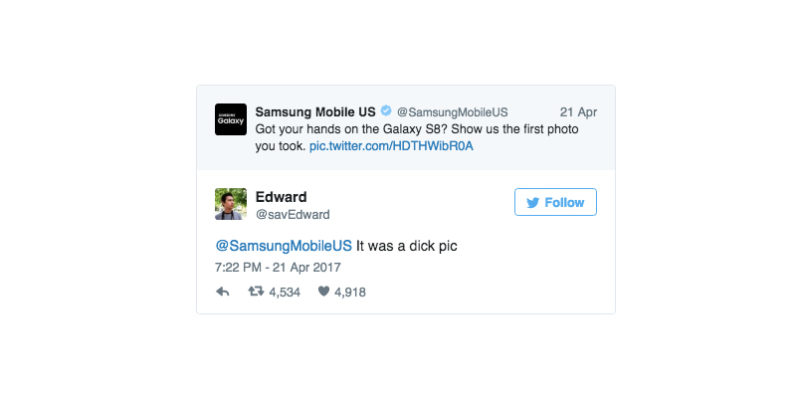 As part of its Galaxy S8 promo efforts, the company took to Twitter to ask its followers to share the very first photos they’ve snapped with their new handset.

Got your hands on the Galaxy S8? Show us the first photo you took. pic.twitter.com/HDTHWibR0A

While many responded to the request and tweeted their first pics back at Samsung, one smartass decided to play it cool, taking this as an opportunity to troll the South Korean behemoth for easy retweets and likes – and possibly some new followers.

@SamsungMobileUS It was a dick pic

But one thing the troll failed to anticipate was the snappy response Samsung’s social media team dished out three minutes later:

Needless to say, the Twitterverse was quick to spot the burn, applauding the company for its hilarious reply:

So in case you’re thinking about messing with Samsung on social media – just know one thing: You might get burned if you play with fire.

Read next: Universities finally realize that Java is a bad introductory programming language