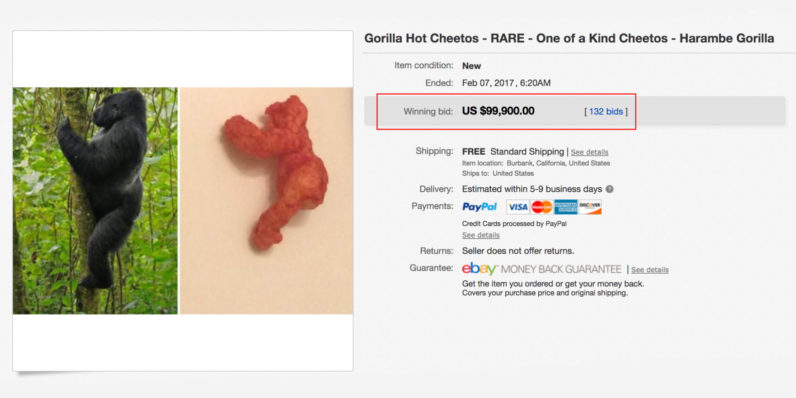 Not many of us open a bag of chips expecting to find a small fortune inside. For one snack aficionado, however, a keen eye led to enough eBay earnings to buy a Tesla (with cash), pay off most student loans, or put a down payment on a house.

An eBayer who typically sells Blu-ray discs struck gold when he found a Cheeto with a passing resemblance to the late Harambe. After being shot at a Cincinnati Zoo last year when a young boy fell into his enclosure, Harambe has since become a piece of internet lore. Now, he’s the meal ticket for an eBay seller who just pocketed nearly $100,000 selling a chip on the online auction site.

The seller, for his part, was creative and consistent.

An ape-shaped Cheeto might have been worth another bag of chips or two, but likening the junk food to a fallen internet hero was a stroke of genius that paid off handsomely. Of course, it took some patience. The seller listed the chip three times over the past month, garnering zero bids each attempt. On the fourth try, it took a week to get its first $12 bid. With some help from Twitter, the $12 quickly turned to $25,000, then $50,000, and now $99.900 — assuming the bids are legit and eBay doesn’t cancel them.

The auction also spurred a few copycats. Another gorilla-shaped Cheeto is going for over $90,000. Perhaps even more creative, a screenshot of the original Cheeto/Harambe auction is in line to earn a lucky seller $10,000, as of this writing.

These stories make me question why anyone decides to go to college.