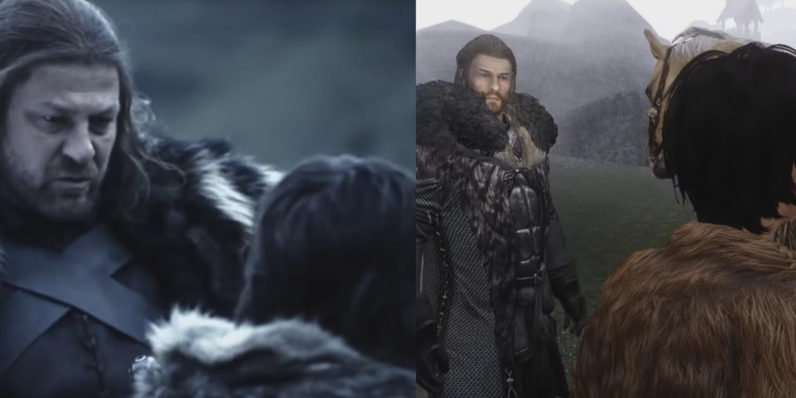 Game of Thrones has some of the most devoted followings on the internet and UpIsNotJump is undoubtedly one of the show’s most loyal fans. The YouTuber has decided to recreate the very first trailer of HBO’s smash-hit series using only bits and pieces from the popular game Skyrim.

To make sure every detail “looks just right,” UpIsNotJump has used more than 260 Skyrim mods – from faces to costumes – to put together a shot-for-shot remake of the show’s original trailer.

While the remake is not entirely perfect, it’s still a pretty impressive and admirable effort – especially when taking into account the limitations of the project.

Here’s the original trailer in case you wanted to compare it to the recreated version:

While the remake covers only the first season trailer, UpIsNotJump has taken it upon him to recreate “every Game of Thrones trailer as time goes on.” This might take a while though as such videos tend to be pretty cumbersome to put together.

This isn’t the first remake project UpIsNotJump has taken up. Previously, the crafty YouTuber has recreated an entire episode of Adult Swim’s Rick and Morty using visuals from bestselling game Fallout 4.

Meanwhile, Game of Thrones‘ new season is slated to debut in the summer of 2017, but a bunch of enthusiasted fans have already flocked to Reddit to speculate about possible twists and turns from the show’s upcoming seventh instalment.

Read next: Samsung says the Galaxy S7 won’t explode like the Galaxy Note 7