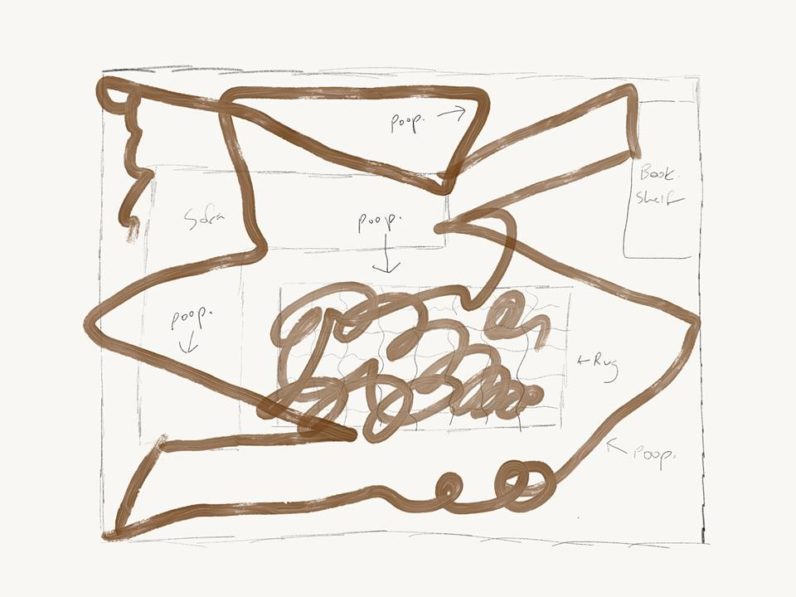 A man named Jesse Newton has a Roomba. He also has a dog named Evie. For apparently the first time ever, Evie pooped in the living room. At 1:30 AM, the Roomba started its house-wide cleaning cycle.

You can see where this is going: not only did the Roomba spray poop everywhere by virtual of its rotating brushes, but it dragged it all over the apartment during its not-so-cleaning run.

If you haven’t figured it out by now, that’s what the header image above represents – as if Jackson Pollock had made feces as his medium of choice (art’s weird, who knows). From Newton’s impassioned Facebook post:

Then, when your four-year-old gets up at 3am to crawl into your bed, you’ll wonder why he smells like dog poop. And you’ll walk into the living room. And you’ll wonder why the floor feels slightly gritty. And you’ll see a brown-encrusted, vaguely Roomba-shaped thing sitting in the middle of the floor with a glowing green light, like everything’s okay. Like it’s proud of itself. You were still half-asleep until this point, but now you wake up pretty damn quickly.

*Shudders* Perhaps worse than the smell and mess was the clean up process:

Then you get out the paper towel rolls, idly wondering if you should invest in paper towel stock, and you blow through three or four rolls wiping up poop. Then you get the spray bottle with bleach water and hose down the floor boards to let them soak, because the poop has already dried. Then out comes the steam mop, and you take care of those 25-ft poop trails.

The $400 Roomba was dead after Newton threw it in the bathtub to soak it, and there was poop all over the insides, but he tried to fix it anyway.

Thankfully, there’s a little bit of light at the end of the tunnel though: Hammacher Schlemmer – a catalog business where Jesse bought his Roomba from – offered to replace it for free. After an experience like that though, I’m not sure I’d have the heart to touch a vacuum cleaner ever again.

If you want a good laugh/cringe, make sure to read Newton’s full post:

Read next: 'No Man's Sky' is now available for PC. Can they take it back?