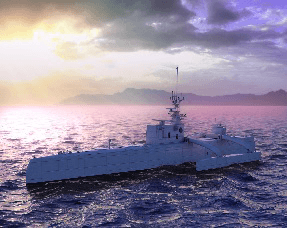 DARPA revealed it was working on a 132-foot unmanned submarine-hunting drone for the ocean in 2010 and now it’s finally ready to launch.

The Anti-Submarine Warfare Continuous Trail Unmanned Vessel (aka ACTUV) will go on its maiden mission on April 7 this year where its job will be to track down stealth submarines autonomously.

Despite weighing 140 tons, the ACTUV is one of the quietest ships around and will be able to withstand months at sea without any crew on board.

As well as hunting down rogue submarines, the ACTUV may also carry out the more mundane task of carrying supplies out to other ships at sea.

DARPA has not explicitly referred to the ACTUV as a weapon but it has been compared to the much more robust naval destroyers, which often seek and eliminate enemy submarines.