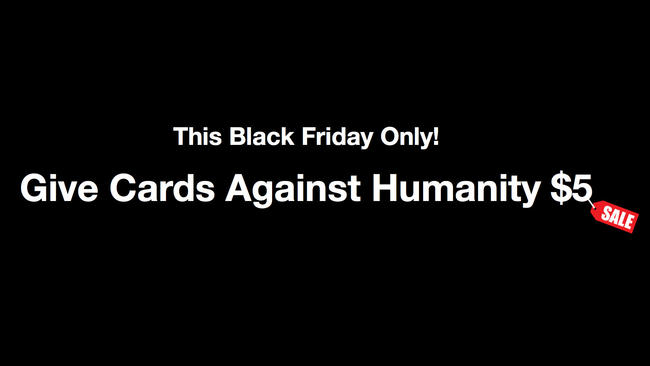 Remember Black Friday? That day where you exchanged a black eye for 30 percent off the newest Wii U game at Best Buy? Yeah, well, if you were one of the people who didn’t do that and instead spent $5 buying literally nothing from game maker Cards Against Humanity, you’ll be happy to know you contributed to the team’s total earning of $71,145.

Yes, the comma is in the right place.

The team also followed up shortly after to report how they’ve decided to spend the cash. In an update, CAH wrote that it has raised nearly $4 million for charities around the globe since 2012. This year, however, the team kept all the cash and spent them on what they presumably never got for Christmas.

Although most of the team members spent the majority of the cut on themselves, they did use a chunk of it on charitable donations to organizations like Planned Parenthood, Wikimedia Foundation, DonorsChoose.org, the Pancreatic Cancer Action Network and more.

Karlee knows how to fucking live.

And Maria shows you how you make it through Thanksgiving weekend with family.

What would you do if $5,000 suddenly landed in your bank account on Black Friday weekend? The results probably wouldn’t be much different than CAH’s.

Read next: Missed out on Black Friday? Make sure you're on time for our Cyber Monday offer!