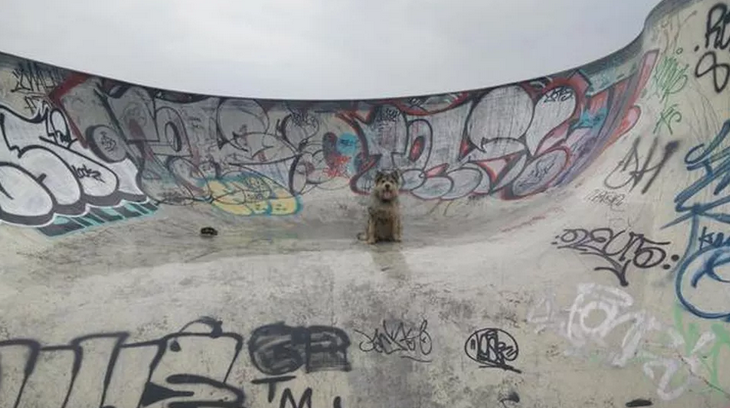 As someone who got trapped in an elevator yesterday, I feel for Ryan North. Luckily for North though, he had the luxury of a pocket computer and fresh air when he got stuck in a skateboarding pit yesterday evening.

The comic book artist cleverly turned to Twitter to ask for people’s advice on how he and Chompsky (his dog) could get out.

If I climbed into this in the rain to get this picture and now couldn't get out, what should I do? Hypothetically pic.twitter.com/g5jdjbed5B

North explained to his followers that the sides of the pit were too slippery and steep to toss Chompsky out the top and follow himself. All he had at hand was his umbrella and ‘pocket computer’ (assume he means smartphone), so Twitter turned into a point-and-click game of sorts as users attempted to solve the real-life riddle.

I am 100% invested in the fate of @ryanqnorth stuck in a hole with a dog and an umbrella. #SaveRyanNorthFromHoles2015

Some of the advice was inventive, but impractical.

@ryanqnorth how amenable is Chompsky to… ballistic propulsion?

Does he take to being thrown well?

Others seemed a little more feasible…

.@ryanqnorth maybe use your tshirt and leash to build a body sling for chompsky to pull him out after you climb out.

No way to make shirt into sling big enough for Chompsky, now I am topless and stuck in a hole, please advise pic.twitter.com/4bhyO2QUgx

North got a little frustrated after half an hour of trial and error.

Come on Internet, you're an entire internet and I'm just one guy in a hole, we can DO this https://t.co/dUrxRy6ztk

But he remained optimistic… Unlike some of his followers.

WHEN I survive!! I have not been killed by a hole yet and I'd frankly prefer not to start https://t.co/r3PVi45LtS

Luckily, Twitter coughed up a viable solution in the end.

@ryanqnorth Well.. pull yrself out, then use the leash to pull Chompsky’s front half up, while grabbing his behind with the umbrella handle!

IT WORKED!! I'M OUT OF THE HOLE! pic.twitter.com/x8QMgUxrSD

After 20 minutes of panic and 40 minutes of rallying the Twitter troops, North and Chompsky were finally free and it seems like people were really inspired by the saga.

@ryanqnorth Your hilarious saga inspired me to make my first game/text adventure. It's as easy as it is terrible! http://t.co/WsJhj2tBcd

You can follow along the entire ‘Hole Quest’ on North’s Storify:

So, next time you get stuck with some time to spare (or not), you know where to turn.