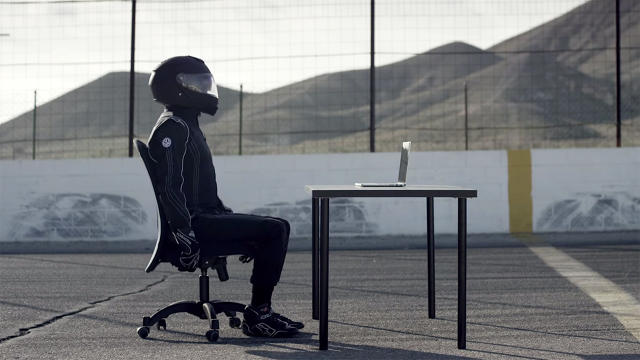 The unique idea puts a tech twist on the repetitive nature of car ads by making it interactive.

Ad agency Deutsche LA created a site that uses deep learning technology to analyze your vroom vroom noises and then creates a customized video of the Golf R racing down a track, drifting, breaking and doing stunts.

It works by classifying your vocal pitch and matching it with a clip of a VW car to determine what type of action the car would be doing.

For example, if you make the noise of an accelerator, you could see the car speeding down a straightaway. Likewise, if you screech, the car might be drifting around a sharp turn.

All of the videos used are pre-recorded by professional driver Tanner Foust so there’s a pool of hundreds to match your sound effects to.

Speaking to TNW, MIT rocket scientist Sabri Sansoy, one of the developers who worked on the project, went into a little more detail about how the AI works:

We extract the audio file from the user generated video and split it into chunks for each individual sound. Then, we analyze each sound using Short Term Fourier Transform (STFT) spectrograms and Mel Frequency Cepstral Coefficients (MFCC).

That data is then fed into the system’s ‘brain’, which is a convolutional neural network (CNN) that has been pre-trained with hundreds of audio samples. The brain then determines the best results based on the data its fed and creates a video.

In short, it’s a fun and innovative idea for an ad campaign, provided you don’t mind granting Volkswagen rights to footage of you assuming the persona of a car, that is.

Read next: Reddit had fun watching a livestream of a Dutch roundabout but, of course, someone had to ruin it

Read next: Smartsheet partners with cloud companies to launch QuickStart Bundle for Office 365