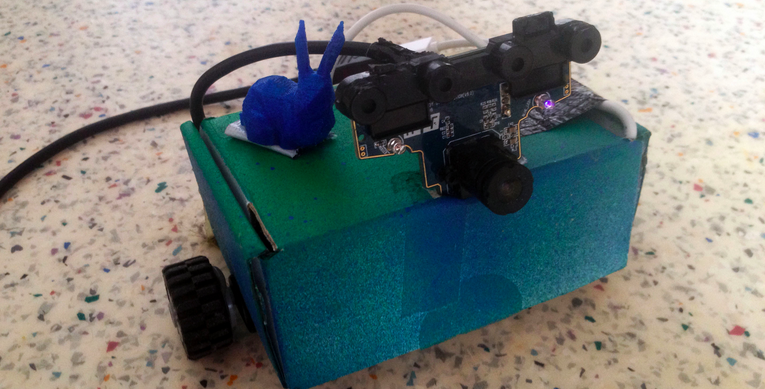 One the internet’s first communal acts of voyeurism was Jennicam, a site where a webcam captured snapshots of a woman’s life so jerkily that it was almost stop motion.

We’re far beyond that now thanks to apps like Periscope, but online oddities can still grab your attention. Like this, an internet-connected robot roving around an apartment in Austria.

Created by Reddit user Eiggem, the little droid can be controlled from this website. It takes an image every time it moves but the picture on the Web page only updates every three seconds, so it’s a pretty disjointed experience. Still, there’s also something very compelling about it.

Rolling around this stranger’s apartment, spotting his washing in the hallway and snooping around the kitchen harks back to the strange mix of disconnection and intimacy produced by early Web experiments like Jennicam.

Eiggem shared on Reddit that the little robot is essentially two servos, a webcam and a Raspberry Pi connected together in a cardboard box, powered by some AA batteries. It’s all controlled by a PHP website and some shell scripts.

Don’t expect it to always be online though. A few days ago he posted: “It just went offline, I had to move it to the kitchen because it’s almost 2am and my roommates were complaining about the noise. But it’s back online now!”

And, of course, people have been trying to hack it. As of four days ago, 400 users from 39 countries had controlled the bot and produced 6,306 pictures. I suspect those figures are about to jump quite a bit.

➤ I made a really crappy robot anyone can control from the internet – be my guest! [Reddit h/t to @endac]

Read next: Google uses this robot to test lag on Android and ChromeOS

Read next: PushBullet overhauled on mobile and desktop with new messaging-focused features