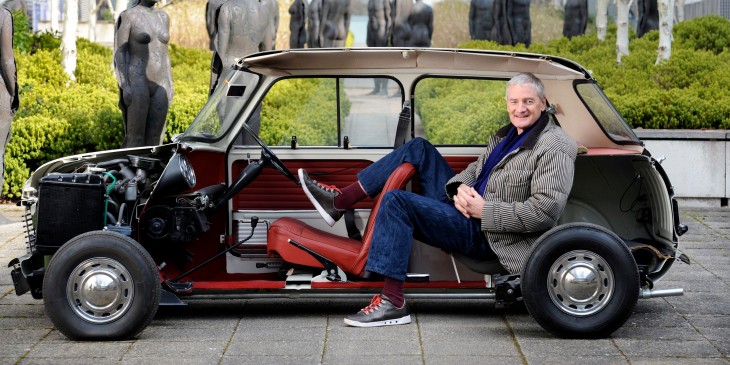 21 years ago and 5,127 prototypes later, James Dyson launched one of the world’s first mass-produced cyclonic vacuum cleaners. And within 18 months, it became Britain’s biggest-seller.

The road to launch for the bagless miracle had been fraught with obstacles. Having failed to convince major manufacturers to take on his invention, with some concerns around its impact on the lucrative replacement dust bag market, Dyson ended up establishing his own company in Wiltshire, England, in 1993.

Since then, the Dyson brand has become synonymous with innovation. The company has produced the Airblade hand-dryer, and the so-called bladeless fan. Today, Dyson holds more than 4,000 patent applications, covering 500 inventions, and the company says its engineers are working with around 20 of Britain’s universities to “develop a pipeline of technology 25 years long.”

But among all the hullabaloo of fans, dryers and vacuum cleaners, it’s easy to forget that for every blazing success story, there’s probably one or two that failed to make the grade too.

While Dyson has traditionally been petty coy about things it’s working on (or has worked on), it has revealed some of the ‘other’ projects it’s invested time and money in that have, well, “never quite made it to market”. Here’s a quick peek at three of these, and one of them in particular is both surprising and familiar in equal measures.

Way back in 2001, Dyson started work on an augmented reality (AR) headset that featured a full-color 3D display. The head-mounted wearable could be carried in a user’s pocket, and it also worked as a communication device and PC. It used audio prompts and visual cues to overlay relevant data on your surroundings.

The Dyson Halo (project name N066) was an interesting one for sure, given it’s divergence from the kind of technology Dyson is typically known for. It also perhaps resonates most, given Google’s recent flirtation with wearables via Google Glass.

Though it never moved beyond prototype stage, Dyson has revealed quite a lot of detail about it:

“Two plane mirrors reflected the display of two tiny monitors, mounted by your temples, onto a prism. This created an illusion of a projected, translucent, 10-inch display one meter in front of you. The screen showed a series of applications similar to the smartphones of today.”

A user could see various applications, such as a virtual assistant that could read out emails, and interpret voice commands. Just think about it – “OK Dyson” may have become a ‘thing’, had it worked out a little differently.

“The prototype incorporated a solid state gyro. This allowed virtual objects to be pinned to reality when moving one’s head up/down or left/right. This enabled a keyboard to be projected in front of the user so that one could type and write emails on any surface.

The headset could be used in audio-only mode, using voice commands and text-to-speech technology. The purpose of this was so users could drive while using the computer, or use it on the go without the display, giving the effect of having a personal assistant whispering in your ear.”

Interestingly, the headset could actually be detached from the computer, and the device could be plugged into a monitor to be used like an actual desktop PC. There was also a controller which could be worn on the wrist, allowing a user to move a cursor across the display.

But alas, Dyson moved away from the Halo after three years of research and development. Why? So its engineers could focus on its existing core products, and push out into the US.

However, facets of the technology are being kept alive in other research projects, so you never know what may emerge from Dyson labs in the future.

In 1997, Dyson began looking at whether the same cyclones that are used into its vacuum cleaners, technology that can filter particles down to 0.5 microns, could be applied to diesel engines. Why? To help combat air pollution, of course.

“Initial prototypes focused on cyclones but the required energy consumption was too high. Condensing oil onto the small particles to increase their radius came next.

But the particle size was inconsistent, allowing inaccurate results, so the focus turned to the use of electrostatics and the final system used an electrical discharge to ionize and collect these particles, which were then burned off in an oxygen rich environment.”

With vacuum cleaners, Dyson had become its own manufacturer to circumvent resistance to its technology. But it had no plans to start making cars, so when automobile manufacturers resisted, Dyson pulled the plug. “Diesel engines now use particulate filters which clog, and as a result, drop in performance – the clogging particles are regularly burned off to improve efficiency,” says Dyson.

For three years, 10 Dyson engineers pooled their expertise to adapt a Dyson digital motor to be used in a fuel cell.

Now, hydrogen fuel cells are used to convert chemical energy from into electrical energy, and they require a significant, constant source of hydrogen and oxygen to run. Electricity is produced so long as these elements are supplied.

With the Dyson Fuel Cell, the aim was to increase performance while reducing size. “The results were impressive,” says Dyson. “The compact, lightweight and highly efficient digital motor V4HF resulted in a 20 percent increase in power density and improved efficiency. The startup time became almost 3 times faster.”

Beyond that, Dyson isn’t entirely clear about what may become of this. However, it has proven its potential, and says it is “exploring other possibilities for the Dyson digital motor.”

So how about that, folks? AR headsets, diesel filters, and fuel cells. Ambitious for sure, and Dyson’s planned $420 million R&D facility expansion could well come up with some pretty exciting stuff, far beyond cleaning your carpets and drying your hands.

Read next: Google will reportedly spend over $1 billion to build satellites that deliver internet access