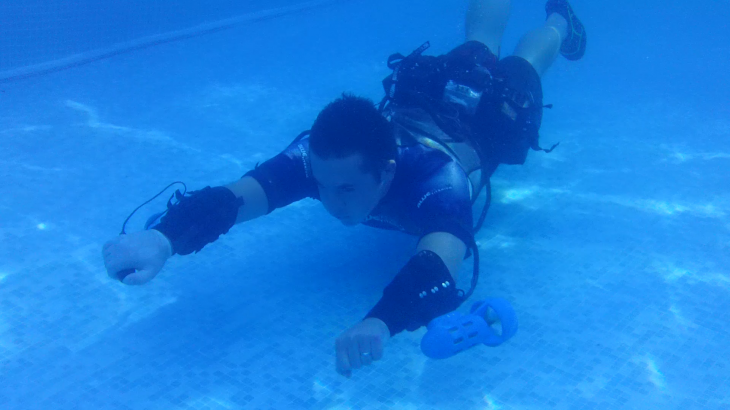 UK-based startup SCP Marine Innovation has announced that it plans to start selling its ‘x2 Underwater Jet Pack‘  in 2014 if its equity crowdfunding campaign is successful.

The current prototype system uses thrusters attached to your arm to amplify natural movements in a bid to allow scuba divers to “fly around underwater”, the company said.

Powering the device is a lithium battery-based technology alongside numerous digital motors and a wireless control system.

“The weightless environment underwater provides amazing potential for acrobatic stunts and freedom of movement,” Simon Parke, co-inventor and co-founder of SCP Marine Innovation said. “The optimum position when using other technology is to hold it out directly in front of you, but this often means that the thrust is directed straight at the user. The x2 Underwater Jet Pack is worn on the outer arms and is fast, manoeuvrable, un-tethered, and frankly redefines underwater propulsion.”

The project is now seeking the remaining funding (it has raised more than a third of its goal already) using the equity crowdfunding website ShareIn.com. Backers can pledge anything above £100 in exchange for a slice of equity in a bid to help the company get to its £72,000 goal.

While that might seem a pretty cool invention to get behind, it’s the concept image (above) that integrates the propulsion system into a full suit that really got us excited. How practical that suit looks for swimming around in is another matter altogether, but we’d be willing to try.

You can check out a short video of it in action below:

Read next: TimeAppsule for iPhone lets you send time-locked videos, photos and invitations to friends