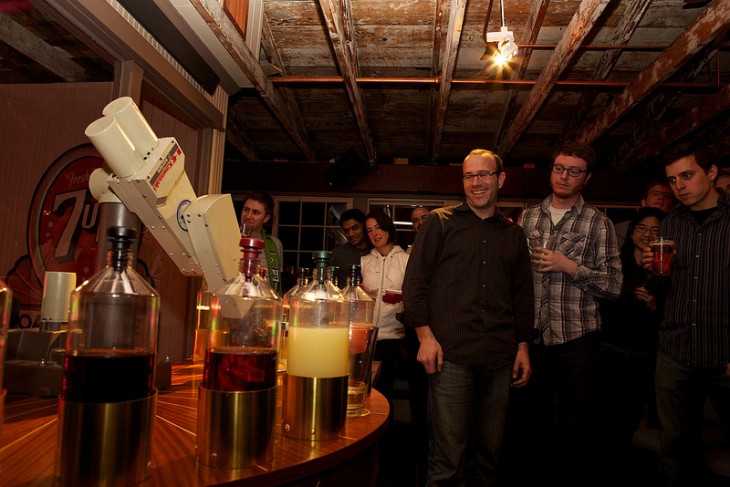 The trouble with hiring a bartender to serve you drinks is that he or she has to leave at some point. What’s the solution, then? Well, if you’re an engineer, you build the Sir Mix-a-Bot: a bartender robot arm that never quits.

Development was slow since Zucker didn’t want to do work after he came home from work, but eventually he announced a public deadline to motivate himself, and finally he got it done in time for his birthday party:

Zucker wrote the software with the help of his brother, built all the controls, and even designed the custom table from where Sir Mix-a-Bot operates. While the robot is far from perfect, and even sober people would proclaim that it’s agonizingly slow, it certainly gets the job done. Furthermore, it’s probably the “life” of the party, as ironic as that may sound.

So, what’s next? Zucker explains:

In short, I don’t really know.

There are still some things I’d like to tune up with the bartender — it occasionally misses when replacing a bottle, the pouring path could be smoother, the LEDs on the menu could be brighter, and so on. If I wanted to bite off a bigger chunk, I might think again about using my own PCB / motor control circuitry, rebuild the touch screen menu with a separate microprocessor, or possibly rebuild the table top (to add decorations and eliminate the bubbling in the veneer).

We’re impressed it works as well as it does. To read the full story about how Sir Mix-a-Bot came to be, head over to Zucker’s blog.

Read next: Download the new issue of The Next Web Magazine: Photography