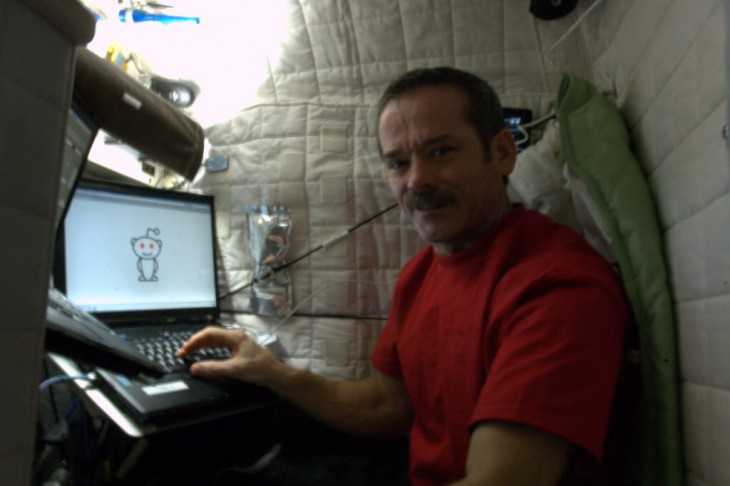 We’ve seen some pretty noteworthy Ask Me Anything sessions on Reddit lately from the likes of President Barack Obama and Bill Gates, but International Space Station Commander Chris Hadfield’s AMA is seriously epic.

Hadfield already did a pre-flight AMA last December, but his latest takes the cake since it’s sent from freaking outer space. He’s logging on via a satellite relay to a server in Houston.

If you ever wanted to be an astronaut as a kid, this is a must read. Here are a few of my favorite answers:

I watched a large meteorite burn up between me and Australia, and to think of that hypersonic dumb lump of rock randomly hurtling into us instead sent a shiver up my back.

Advice for kids who want to be astronauts:

To be an astronaut you have to be healthy (eat your greens and exercise), smart (do your homework), and trustworthy (do your jobs well). Then you get the suit and rocket.

The biggest danger he faces:

The biggest danger is launch – all that power and acceleration. Once we survive that, it’s just a steady threat of radiation, meteorite impacts, and vehicle system failure like fire or ammonia breakthrough.

How the world looks from space:

It looks like a carpet of countless tiny perfect unblinking lights in endless velvet, with the Milky Way as a glowing area of paler texture.

Which part of the world looks coolest?

Australia looks coolest – the colours and textures of the Outback are severly artistic. The most beautiful to me are the Bahamas, the vast glowing reefs of every shade of blue that exists.