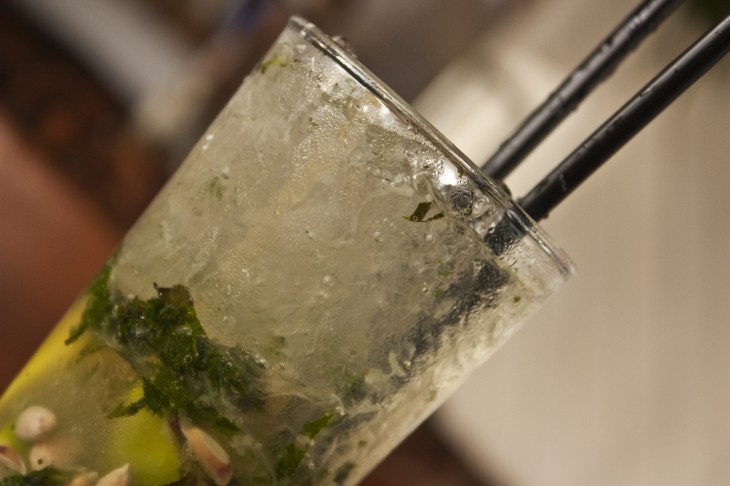 What do you do when you have too much to drink? Most people whine and groan. Some get a hangover. Others declare they will never drink again!
Meet MIT Media Labs researcher Dhairya Dand. On November 23, he experienced an alcohol-induced blackout after three drinks, and woke up in the hospital the next day.

Here is the result:

After an alcohol induced blackout, I made self-aware glowing ice-cubes that beat to the ambient music. The electronics inside the ice-cubes know how fast and how much you are drinking. The cubes change color from green to orange to finally red as you keep drinking beyond the safety limit. If things get out of control, the cubes send a text to your close friend using your smartphone.

In other words, not only did Dand go way beyond what most people would do to make sure he never has a terrible night of drinking again, but he actually created a device that would help him out. All he has to do is remember to bring and use the ice cube.

The device in question is made of a coin cell battery, an ATtiny microcontroller, and an IR transceiver. The three are molded into a gelatin ice cube. The microcontroller counts the number of sips per drink, and eventually Dand wants it to change color as it goes.

The best part is that if the limit is breached, the IR transmitter signals to Dand’s cell phone to send a text to a friend. The text can be anything, but in this case it’s probably best to inform the friend to take Dand home.

While Dand’s design probably won’t be changing the alcoholic industry anytime soon, it’s definitely an interesting way of solving the problem. Bottles, cups, and even ice cubes embedded with chips are no longer a thing of science fiction.