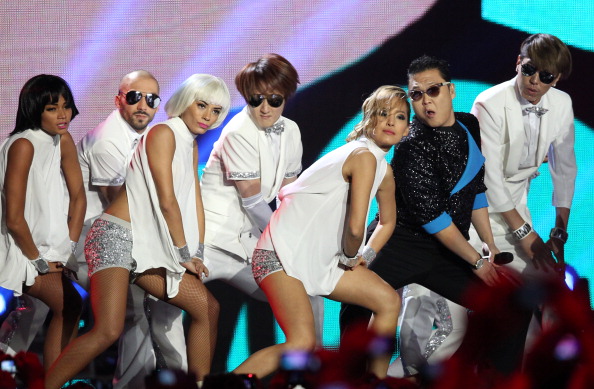 “Gangnam Style” is back and it’s too legit to quit. At the 2012 American Music Awards, South Korean pop sensation Psy performed his hit song with the help of legendary rapper, artist, and entrepreneur, MC Hammer.

We took the liberty of skipping to the Hammer segment since you’ve probably heard/watched it a million times already.

With over 1 billion views on his YouTube channel, Psy has created a phenomenon that will surely rival that of the Macarena or the Electric Slide. His hit single from his latest album has been watched 708 million times, rivaling that of Justin Bieber’s “Baby” video, which has 798 million. It is so popular that it even has a record in the Guinness Book of World Records having received more than 2.14 million likes — making it the most liked video in the website’s history!

And it’s not just ordinary people who are infatuated with this song. Celebrities are ecstatic about this and love to do the dance, with Psy teaching Britany Spears, dancing with Madonna, and now even performing with Hammer at the AMA.

In this segment, Psy starts off with “Gangnam Style” but wearing Hammer’s signature pants. But soon enough, around the 2:55 mark, Hammer comes out to perform to his hit song “Too Legit To Quit” and what happens is an awesome mashup of the two songs. The dance choreography of the two performers is outstanding — just take a look at the video above.

Hammer has been an avid and involved supporter of the technology industry over the years. Not only that, but he’s also an entrepreneur himself. You can normally catch him at a really great tech conference where he listens to pitches and even participates in panels. SV Angel legendary investor, Ron Conway, said once that Hammer is a tech visionary: “Lots of other entertainers don’t get tech, but he [Hammer] was one of the first people to visit YouTube and Twitter and adopt these technologies; he uses it everyday.”

He’s also an investor in Square, a social media advisor to Flipboard, co-founder of DanceJam.com, founder of WireDoo, and is reported to also be an investor in several other tech companies. Oh, and he’s also star and creative consultant of the video Conway funded to get San Francisco Mayor Ed Lee to run for office — the one where well-known figures like Will.i.am, Yahoo’s Marissa Mayer, YouTube’s Hunter Walk, Twitter’s Biz Stone, and others endorsed the mayor.

Psy is also no stranger to the tech industry, having performed the dance with Google Executive Chairman Eric Schmidt a couple of months ago.