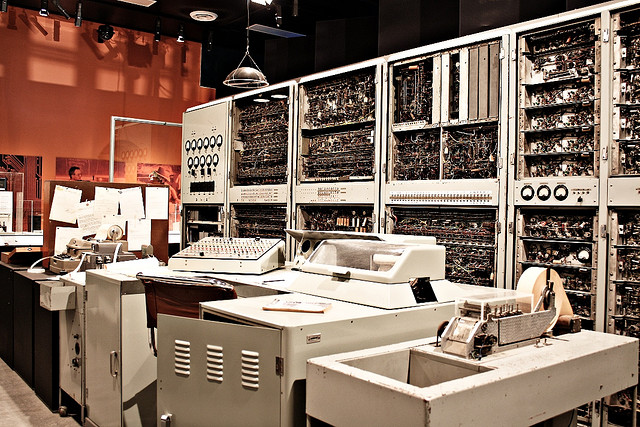 Wikipedia informs us that there was a time before the Internet. Sadly, I have spent so long online that my memories only go back as far as my first tagged Facebook photo in 2007. Here are some videos of people talking about and predicting the Internet, which are now on the Internet (mind, blown). Some of them are pretty funny.

Mad Men style computing (oh, the hipsters would have loved this)

Here’s the Internet circa 1969, complete with women shopping and men being serious. They got a lot of it surprisingly accurately, but were concentrating so hard on the tech they missed all the social changes. Who would have thought that women would have their own bank accounts to pay for all those pretty dresses in the near future?

“What is Internet, anyway?”

Watch the presenters of NBC’s Today show get all confused with the Internet and the @ symbol. This segment wasn’t aired, but it’s a funny little insight into the early days of the web, when many of us weren’t too bothered or just plain confused about this silly new fad.

When music and the Internet were still friends

MTV aired this feature on music and the Internet way back in 1995. Of course, this was four years before Napster sent the music industry into piracy paranoia, so the artists interviewed are all wide eyed and optimistic with the possibilities of messaging their freaky fans. And it was all long before Twitter would come along and make it super easy to hurl abuse at any artist you fancy. I think there were fewer trolls back then — it just took so much more effort on dial-up.

Fifth-graders in 1995 accidentally predict the Internet in 2012

Sci-fi writer Isaac Asimov believed the Internet would democratize learning and make it more fun. Why, just let the people follow their own ‘bent’ and they’ll learn on their own, he says. Sorry Isaac, they don’t, they’ll look at cat photos, boobies, play Farmville, then look at more boobies.

Asimov optimistically hypothesises that, although children may start by looking at baseball all day, they will gradually move towards… math. Has he ever met a child? Maybe children were different back then, but I don’t think you can just let them roam free and hope they’ll aim for math. Most adults can’t stay on track online, let alone children. Asimov, people don’t learn online, they look at memes and Moshi Monsters. I’m sorry, but that’s the way it turned out.

This mock documentary released in November 2004 painted a frightening picture of the Internet’s future effect on publishing and journalism. In this ominous vision, Google and Amazon combine forces to become Googlezon in 2008, suck all the revenue out of news and by 2010 the NYT stops publishing online, replaced by the evil Googlezon and an army of free bloggers.

It’s pretty accurate in its themes though, as Google does make money linking to other peoples work, something that we’ve come to accept. However, it used to be the cause of massive debate and as recently as 2009 Murdoch threatened to remove all News Corp links from Google. But the big disappointment in these dramatic predictions is clearly the lack of cheap digital paper. I like my iPad, but I’m still waiting on my minority report style USA Today to arrive.

Excuse the lack of embedding on this one, the content’s so retro that it was published a year before YouTube was born and you’ll have to click this link.

Some old British bloke got it right!

Way back in 1974, Arthur C. Clarke predicted the Internet and PC more accurately than anyone. Here’s a video of him chatting to the Australian Broadcasting Corporation. The stuff he came out with must have seemed like fanciful nonsense down under, where they didn’t even have full colour broadcasts yet. Ten years earlier in 1964 he’d made some pretty crazy predictions that still haven’t happened, so I’m eagerly awaiting my Total Recall style memory enhancements and genetically engineered dolphin-monkey servants.

Here’s an old TV ad that has absolutely nothing to do with the Internet, but does show life before Starbucks. Who in the 60s would have thought there’d be a day when a man could go to one of 100 local Starbucks and avoid his wife’s ‘disgusting coffee’? I even know of men who learned to make coffee themselves, you know.

Read next: How to create an awesome Tron inspired app icon