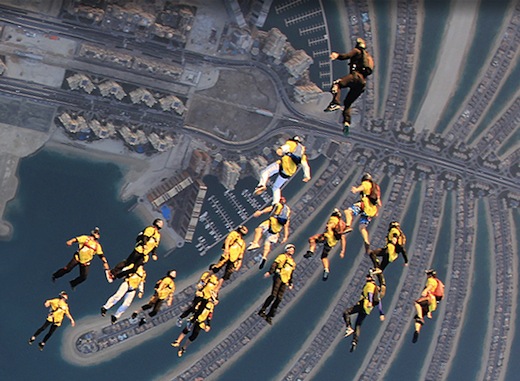 Sure, it’s a massive publicity stunt, but hey, nice if slightly dizzying video:

What you see above is the world’s most expensive billboard, located in downtown Dubai at the entrance of the Burj Khalifa, the world’s tallest building.

So what makes it the world’s most expensive billboard then?

Why, some back-of-the-envelope math of course! From the press release:

The seconds of flight time for the billboard in Downtown Dubai would cost a minimum of $500 per second. If the number of seconds in a month (60 seconds x 60 minutes x 24hours x 30 days = 2,592,000 seconds) is multiplied by $500, the total amounts to approximately $1.3 billion for the month-long fly time for the billboard.

As I said, a publicity stunt. But it works – I really want to go skydiving in Dubai now.