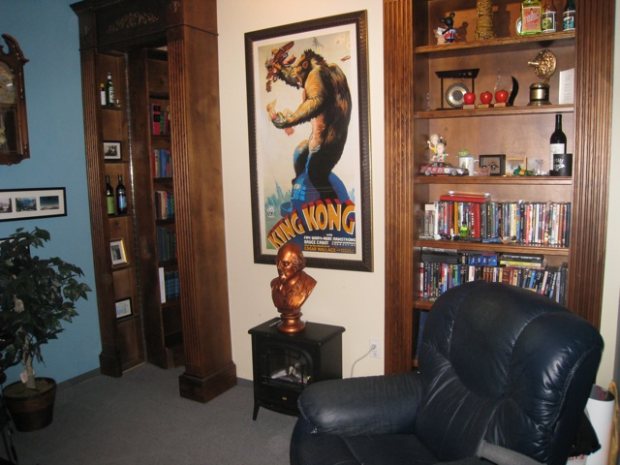 Truthfully, I thought everyone knew about the ‘Lucky 7 Lounge’. It’s a secret room at Pixar that’s really not so secret now. But I took a quick poll of some friends and coworkers and drew a blank, so here goes.

It was a nook, really, created by the shape of the building around it and the needs of the air conditioning system when the company’s new headquarters were built. Animator Andrew Gordon discovered it while investigating a human-sized hatch in the back wall of his new office. After finding that the tunnel ended in a ‘lost space’, he decided to start decorating.

In this clip from the Toy Story 3 bonus features, shared by Scott Myers at The Blacklist, Gordon details the discovery and decoration of the room. He also goes into how it was found by Pixar Director Andrew Stanton and, eventually, CEO Steve Jobs, who thought it was super cool:

Later on, the room was modified to add a sliding bookshelf with a hidden button, for easier access to the lounge.

The Steve Jobs biography by Walter Isaacson also touches on it, but calls it The Love Lounge. Apparently, Steve loved to bring people there:

The wackiest piece of serendipity was “The Love Lounge.” One of the animators found a small door on the back wall when he moved into his office. It opened to a low corridor that you could crawl through to a room clad in sheet metal that provided access to the air-conditioning valves. He and his colleagues commandeered the secret room, festooned it with Christmas lights and lava lamps, and furnished it with benches upholstered in animal prints, tasseled pillows, a fold-up cocktail table, liquor bottles, bar equipment, and napkins that read “The Love Lounge.”

A video camera installed in the corridor allowed occupants to monitor who might be approaching. Lasseter and Jobs brought important visitors there and had them sign the wall. The signatures include Michael Eisner, Roy Disney, Tim Allen, and Randy Newman. Jobs loved it, but since he wasn’t a drinker he sometimes referred to it as the Meditation Room. It reminded him, he said, of the one that he and Daniel Kottke had at Reed, but without the acid.

This is the room itself, with Gordon at center with the 2008 Oscar nominees for Animated Short:

Here’s the hatch originally leading into the room:

And here’s a shot of the ‘Lucky 7’ sign and the secret button, courtesy of Singaporean blogger Xiaxue:

And the panel that hides the room, from that same AWN tour:

So, there you go, the secret room at Pixar, now you know.