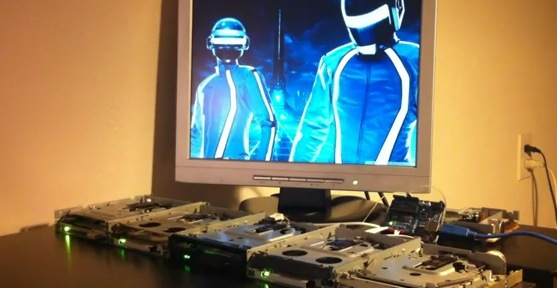 Having spent a large part of my youth listening to the crunchy grinding noises of 3.5″ floppy drives, they’re almost a lullaby to me now. But the crazy kids these days aren’t satisfied just listening to the sounds of these relics, they have to make music.

YouTube user MrSolidSnake has a rig with a bunch of floppies cabled into it that he uses to reproduce video game theme songs and movie music. This one is particularly awesome as it is the song Derezzed by Daft Punk from Tron:Legacy, the sequel to one of the best nerd movies ever.

If you liked these tunes, be sure to check out the Imperial March from Star Wars on floppies too.

Read next: Nokia: We'll say it again, Microsoft is not buying us