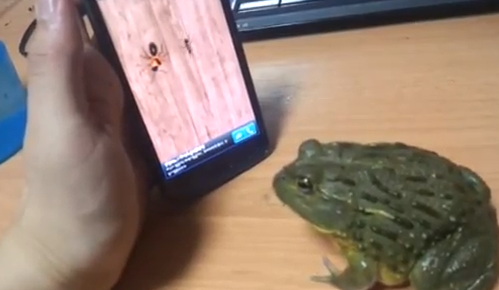 Sometimes it’s hilarious to taunt your amphibian with fake flies on your smartphone. We saw a lizard getting the juice to hilarious effect here, with the Android game Ant Crusher.

The gent below attempted the same trick with his South American horned frog (also known as Pacman frogs for their large jaws), but failed to realize that holding the phone  with juicy, meaty fingers while he taunted it with fake food was probably not the best idea. Wait it out till the end.

Pacman frogs are known to have razor sharp teeth.

Read next: Our obsession with social networks guarantees their advertising power