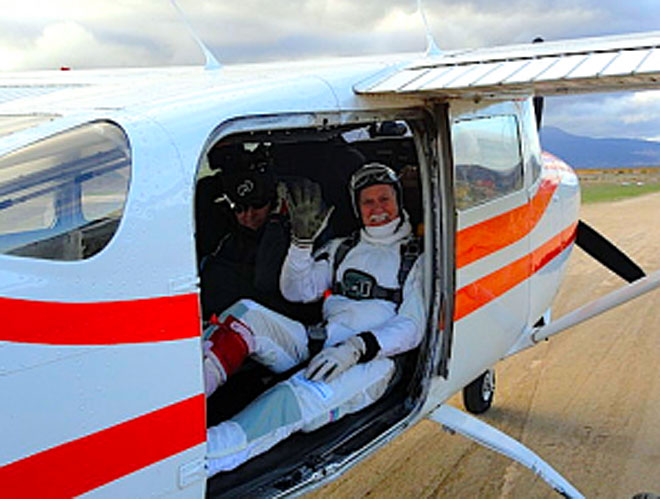 If only all grandpas were this badass. For his eightieth birthday, California resident Pat Moorehead set the record for most skydives by an 80-year-old in one day after leaping out of a plane eighty consecutive times in only seven hours. Wow.

When I think back to my own grandparents at eighty, the first thing I imagine is their brittle bones shattering as they attempt to land peacefully on the ground (apologies if that’s a bit graphic for some of you). Moorehead, however, appears to be in perfect physical condition — though I suppose you should be if you’re going to be jumping out of an airplane eighty times in a row.

“Each jump should take no more than five minutes,” Moorehead told Patch.com, explaining that his team removes his parachute on landing then quickly outfits him with another pack before he jumps back in the plane that takes him to 2,200 feet for his next dive.

I should also note that the skydiving event helped to promote a fund raising effort for the construction of a National Skydiving Museum in Fredericksburg, Virginia. In the video below, you can see several skydiving aficionados both supporting Moorehead while wishing him a very happy eightieth birthday, as well as witness one of his actual dives.

Being terribly afraid of heights and falling to my death myself, I have to say: Moorehead’s definitely got guts.

Oh, and am I the only one who thinks it’s odd that the record-setting was specific to Moorehead’s age? If that’s true, shouldn’t anyone in the world be able to set random records with oddly specific criteria? For example, after today’s shift, I shall set the record for most turkey eaten by a 5’1, 93 pound Asian female while visiting family during Thanksgiving. You heard it here first, folks. Look out for me in the headlines.

Read next: Wow, now Siri can even start your car's engine for you [Video]