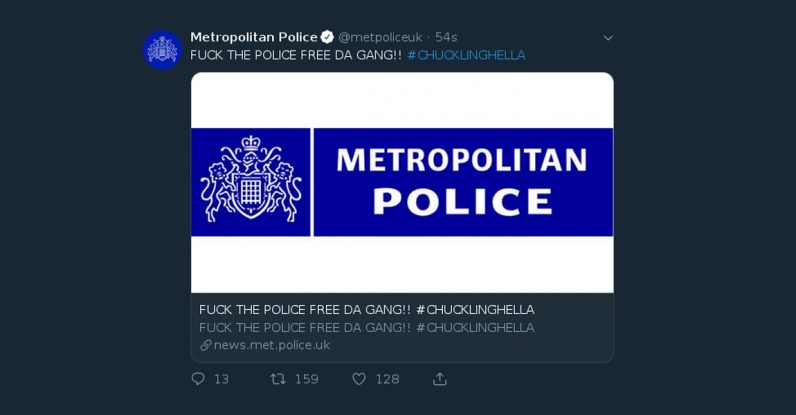 It appears hackers briefly took over UK Metropolitan Police’s website, posting a series of bizarre messages on its press section and social media accounts, including one which read “FUCK THE POLICE.”

The messages were sent around 22:30 UTC on July 19, 2019. The Met Police team has since confirmed the breach occurred via third-party software.

“Last night, Friday 19 July, unauthorised messages appeared on the news section of our website as well as on the @metpoliceuk Twitter feed and in emails sent to subscribers,” it said in a statement. “While we are still working to establish exactly what happened, we have begun making changes to our access arrangements to MyNewsDesk.”

“The Met Police Press Bureau uses an online provider called MyNewsDesk to issue news releases and other content,” officials explained further. “When a story is published via MyNewsDesk, it appears on the Met’s website and Twitter accounts and generates an email to those who’ve subscribed to receive our news updates.”

Police were quick to regain control of its website and social media accounts, but not before tons of Twitter users managed to grab screenshots.

@metpoliceuk #metpolice Twitter account was/has been #hacked and their website seems to be affected too atleast the latest news section of it and there is no certificate here: https://t.co/RFQTRXBiRq pic.twitter.com/sLcXT1PbVI

Among other things, the messages made references to rapper Digga D and popular internet personality Keemstar, who runs a YouTube channel called DramaAlert.

While the messages have since been wiped from the police’s account, a cached version of the Digga D press release is still indexed on Google Search.