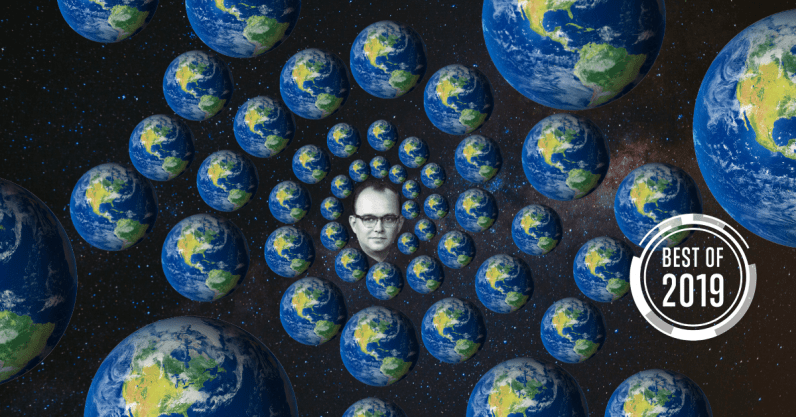 Have you ever laid wide-awake in the late hours of the night wondering what your life would look like if you took that other job, moved countries, or ended up with someone else? While there’s no definite answer — and probably never will be — the idea that there’s multiple versions of you, living in various universes, isn’t as make-believe as you might think.

According to Sean Carroll, a theoretical physicist at the California Institute of Technology and author of Something Deeply Hidden: Quantum Worlds and the Emergence of Spacetime, the theory of Many Worlds Interpretation suggests every important event has multiple possible outcomes and splits the world into alternate realities.

The birth of the multiverse

This mind-bending idea originally came from Hugh Everett, a graduate student who wrote just one paper in the 1950s. Everett’s theory describes the universe as a changing set of numbers, known as the wave function. According to Many Worlds, the universe continually splits into new branches, to produce multiple versions of ourselves. Carroll argues that, so far, this interpretation is the simplest possible explanation of quantum mechanics.

“The ideas we have had for at least 25 years, before Everett came along, was this puzzle in quantum mechanics that there’s one set of rules of how wave functions behave when you’re not looking at them and there’s another set of rules for how they behave when they get measured,” Carroll told TNW.

According to Live Science, quantum mechanics is the body of scientific laws that describe the bizarre behavior of photons, electrons, and any other particles that make up the universe. At the scale of atoms and electrons, many of the equations of classical mechanics, which describe how things move at everyday sizes and speeds, cease to be useful.

“A lot of people, including Everett, thought this didn’t sound right, he said you are quantum mechanical also because you’re made of atoms and particles, and there’s only one wave function so you’re really part of this function.”

According to Carroll, this theory raises philosophical problems in regards to how you treat and treat the copies of you other branches because they’re originated from us. “They share the same memories as you and they have every right to be thought of as ‘you,’ but they’re separate people in a different universe. The number of universal branches increases over time, and the older you get, the more versions of ‘you’ there are.”

To better understand this, Carroll dumbs it down to being “much like a Star Trek teleporter that malfunctions and makes two copies of you — they’re both real, but they’re gonna live different lives and there’s nothing you can do about it.”

Carroll argues that your identity over time is like a branching tree where there’s many possibilities for the future. But once one version of you has branched, there’s no way to communicate with them. “But they’re definitely there and they’re as real as you are according to this interpretation.”

According to Carroll, he doesn’t think a new self is formed by every single tiny decision you make or don’t make in life. “You didn’t decide to have a pizza or hamburger one evening and in one branch, you end up having pizza, and the other branches you had a hamburger — it’s only when you measure quantum mechanical systems that new worlds are created.”

The pushback against the idea of multiple versions of ‘you’

Like many theorists, Roger Penrose, a mathematical physicist and philosopher of science, dismisses the idea of Many Worlds as physics reduced to absurdity, as reported by Mach. However, Stephen Hawking, who was a theoretical physicist and cosmologist, believed this theory was “self-evidently true.”

Some scientists have rejected Everett’s original explanation. But even now, decades later, no one has found any flaws in the equation itself. Because of this, scientists like Carroll have agreed that Many Worlds is the only logical way to understand quantum mechanics.

“If we take this theory seriously, we can explain unlikely events like ‘quantum tunneling,’ where we know that one particle can tunnel through another particle, this is what happens when a radioactive nucleus decays,” Carroll added. “If you follow through that same logic, I could take a coffee cup and put it on the table and there’s a chance it will tunnel right through and just hit the floor. This chance is incredibly, enormously, and hilariously small, but if you believe in Many World, there’s a world in which it happened.”

According to Everett’s theory, it’s possible that an infinite number of ‘you’ lives somewhere in existence. This bizarre theory is enough to make you question the whole meaning of life, and rethink your beliefs of fate and destiny.

To make sure you rest easy at night, worrying about all your life choices and potential, Carroll assured “The universe knows what’s going to happen and we’ll never know until we actually get there and see what’s going on, and there’s nothing you can do about it.”