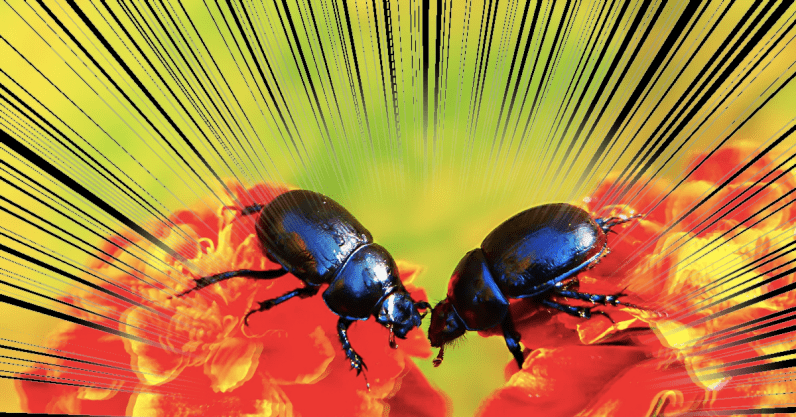 Animals around the world are seeing their environments change. Climate change is causing heating and changes to weather patterns, the oceans are becoming more acidic, and previously undisturbed habitats are being altered and degraded by human activities.

If we want to understand how these changes will affect animals around the world, we need a better understanding of how their biology might determine how well they survive these changes. My colleagues and I have just published research that demonstrates how important an animal’s mating system is to this. We found that species whose males compete for mates are more likely to survive damaging changes to their environment.

In many species, males try to woo females with signals like calls, coloration or long tails, or they try to monopolize access to females by fighting other males with weaponry like horns or antlers. This competition for mates helps drive the evolution of these species, in a process called sexual selection. The most attractive or most aggressive mates are more likely to pass on their genes to the next generation and produce more offspring with their attractive features or aggressive nature.

There are many reasons to think competitive mating could affect the resilience of a species to environmental change. First, the signals and weapons that often evolve in those species where competition is more intensive are costly to grow and to carry. They can make animals more conspicuous to predators, and both contests with rival males and extravagant displays to females can use enormous amounts of energy. So these strongly sexually selected species could be less able to cope with environmental change because of these costs.

On the flip side, strong competition between males for mates means that only a few particularly strong, healthy or energetic males “win” and father the majority of the next generation. If the environment is changing, then males that are genetically best suited to the new environment are likely to be in the best condition. If these males end up as the winners in the competition for mating then their well-adapted genes will spread very rapidly.

So strong sexual selection could make animal populations adapt faster to new environments, making them more resilient in the face of it changing.

So which process is more important in influencing species survival? A series of lab studies have consistently found that strong sexual selection improves outcomes for animal species when the environment shifts from their optimum. But studies of animals in the field have often found either no effect of sexual selection or the opposite. For example, when birds have been introduced to islands such as New Zealand, then the species that are more sexually selected are less likely to become established.

One possible reason for this disparity is that the field studies have often concentrated on very small populations of animals. It’s possible that the effects of sexual selection on a population’s resilience vary with its size.

Very small populations living in a certain location might not have enough genetic variety to produce individuals that are very well adapted to its particular environment. In which case, the costs of sexual selection could make them more likely to go extinct. Whereas large populations are more likely to have the genetic variety that will produce “winning” males even when the environment is unfriendly.

What was needed was a field study of sexual selection and persistence in larger populations. To that end, my colleagues and I conducted a study, published in Ecology Letters, of how dung beetles respond to environmental change in the rainforest of Sabah in Malaysian Borneo.

Dung beetles are fascinating animals for many reasons, one of which is the diversity of their sex lives. Males from the familiar ball-rolling species do compete for matings.

But there are also many species of dung beetle that don’t roll, instead burying dung directly under where they find it, and these species show much greater variability. Some species have males with horns, which they use in fights with other males, whereas others are less strongly sexually selected, with hornless males who are less aggressive in their pursuit of mates.

Using an existing large-scale study called the SAFE Project, we followed 34 species of beetle found in untouched “old growth” forest. We looked at how they fared in lightly-logged and heavily logged forest and then oilpalm plantation where the original forest was largely removed.

We found that those species with horns were more likely to survive in all these cases. Strikingly, all 11 remaining species in the most disturbed plantation environment carried horns.

We also compared species with relatively small horns against those with big horns for their size. We found that beetle species with big horns are not only more likely to survive in disturbed environments, but they also tend to have larger remaining population sizes.

This tells us that – in some particular cases at least – we should think about sexual selection as well as other aspects of an animal’s biology if we want to predict or to manage population sizes in the face of environmental change. Sexual selection is a ubiquitous and powerful force driving evolution in the animal kingdom and has been intensively studied by behavioral and evolutionary biologists. Maybe now it’s time ecologists and wildlife management specialists started to think about it as well.

This article is republished from The Conversation by Rob Knell, Reader in Evolutionary Ecology, Queen Mary University of London under a Creative Commons license. Read the original article.

Read next: YouTube Premium is rolling out 1080p video downloads