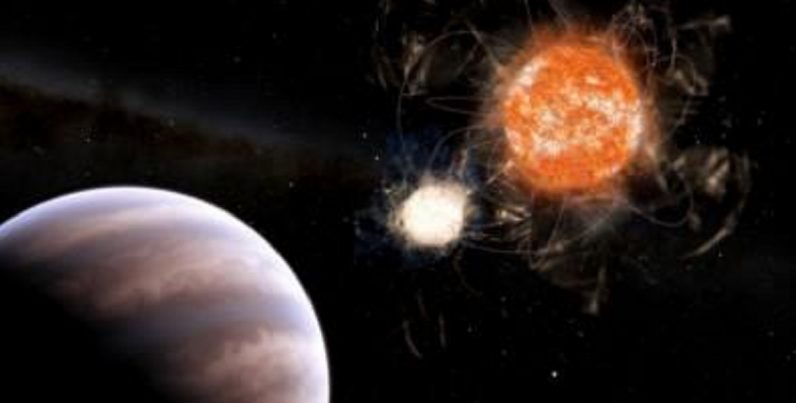 A team of Brazilian astronomers recently determined a giant exoplanet, over thirteen times more massive than Jupiter, is likely responsible for some funky orbital observations of a far away half-dead binary system. How it got there remains a mystery, but the scientists have some interesting theories.

KIC 10544976 – or ‘the place where a big ass planet got discovered’ as we like to call it – is a binary system (comprised of two stars) considered to be ‘evolved.’ Another way of putting it is that they’re old. They’re so old, in fact, that one of them is actually a white dwarf – a star that’s spent all of its nuclear energy. This means the massive planet is likely one of the more mature ones scientists have ever encountered.

The team observed some strange orbital occurrences in KIC 10544976 over the course of several years of study by both ground telescopes and the Kepler Space Telescope. Over time they systematically shot down hypothesis involving the stars’ gravitational pull on each other to determine that ‘Super Jupiter’ (we’re still work-shopping a name for it) must be what’s causing the oddness. In essence, there’s a planet-sized fluctuation in the orbit that’s possibly explained by the massive planet’s existence.

Of course, the only way to determine this is with math. We can’t actually see the planet, so part of Kepler’s mission from 2011 to 2018 was to observe the portion of space near the constellation named Cygnus “The Swan,” where the binary system called KIC 10544976 is located. According to the scientists:

One possible explanation for the ETVs is the presence of a circumbinary body with a minimal mass of ∼13.4 M Jupiter. In the particular scenario of coplanarity between the external body and the inner binary, the third body mass is also ∼13.4 M Jupiter. In this case, the circumbinary planet must either have survived the evolution of the host binary or have been formed as a consequence of its evolution.

The scientists believe the planet may be a first or second generation planet. This means, if it’s really there, it’s older than anything in our solar system. There’s currently no way for astronomers to tell if it’s a planet that could support life or any other topographical features yet. But new ground-based telescopes with huge mirrors, such as the Giant Magellan Telescope slated for launch in Chile in 2024, should shed further light on the more than 4,000 recently discovered exoplanets surrounding us in space.

Read next: You can now create and edit Google Docs right within Dropbox