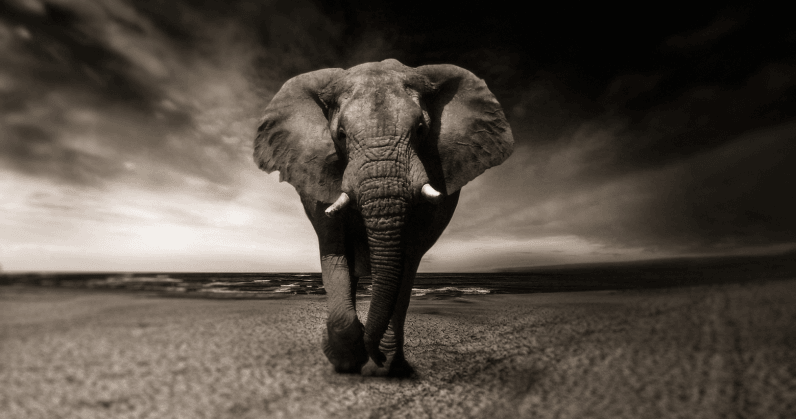 A study published Wednesday in Science Advances detailed a creative approach to stopping the illegal ivory trade. While our awareness of the problem has grown in recent years, it hasn’t slowed demand. In Africa alone, some 100 elephants are killed each day due to the insatiable lust brought on by the illicit ivory trade.

Journalist Jeffrey Gettlemen described the carnage in harrowing detail in a 2012 report, saying 2011 broke the record for illegal ivory seized at 38.8 tons, or more than 4,000 dead elephants. 2011 also marked the first year that the world lost more elephants than reproduce, threatening the entire species. In 2018, populations are still in decline, with more elephants being killed for ivory than those born. The population is in trouble. Now, there could be as few as 400,000 remaining.

Dr. Samuel Wasser, director of the Center for Conservation Biology at the University of Washington may have found a solution, or at least the beginnings of one.

The difficulty in catching poachers is due to the wide area in which they operate, the relatively small amounts of ivory they move at a single time, and how easy it is to disguise the contraband among other, legitimate goods. Police and conservation authorities are simply overmatched.

Dr. Wasser might have an answer. He and several colleagues recently demonstrated a method that he hopes will help authorities catch and convict more traffickers.

To start, the team developed a genetic map of African elephants by analyzing their scat across the continent. From there he began linking seized ivory with sources of elephant scat that matched after genetic analysis. Using a $100 test, the team was able to determine the origin of confiscated tusks, helping conservationists determine the area in which the animal was killed. Once authorities know where an animal is killed, they can then step up enforcement actions in these hot zones. One of these spots, Gabon, in West Africa, has lost 60 percent of its elephant population in the last eight years.

Cartels often divert tusks into separate shipments, both to avoid detection of a single, large shipment, and to minimize losses should one be seized. For traffickers, this also decreases the risk of being linked to a larger operation. Or, it did, anyway. Researchers can now strategically analyze tusks found in multiple shipments in an attempt to link tusks to one elephant, or a single family of elephants. Criminals caught trafficking in large quantities of ivory face much harsher sentences when caught.

As much as 70 percent of the illegal ivory makes its way to China, where a pound can sell for upward of $1,000. “The demand for ivory has surged to the point that the tusks of a single adult elephant can be worth more than 10 times the annual average income in many African countries,” Gettlemen writes. For some, it’s a cure-all used to treat various ailments or diseases. Others use it as an aphrodisiac. Medically-speaking, though, it’s useless. Science has shown that ivory, essentially, is the world’s most expensive placebo.

For others, it’s an investment they hope will return dividends should the elephant ever be hunted to extinction.

Demand, however, doesn’t seem to be slowing. Breaking centuries-long beliefs in the power of ivory to heal has been slow-going, much as it was for the shark fin commonly used in healing stews.

“We need something really urgent that gets in there and really stops the trade in its tracks,” Dr. Wasser told the New York Times.

With any luck, he may have found it.

Read next: Leak: Amazon's Echo Sub will turn Alexa into a 2.1 stereo system