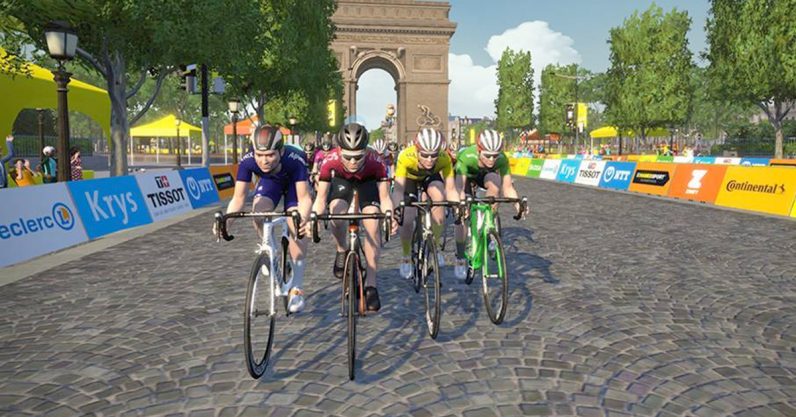 Elite sports events are still largely closed to the world – but July 2020 has still been an unprecedented month for the global sporting calendar thanks to the world’s first Virtual Tour de France, which – despite the name – was based nowhere in particular, as riders took part from their homes in all parts of the world.

It’s historic, not just because the event brought together the world of esports cycling and the iconic and grueling race – this was also the first time that women competed in a multistage Tour.

There were some key differences. Rather than being an individual race, it was run in teams, it was a lot shorter than the actual Tour and, most importantly, it involved cyclists sitting on their bikes indoors plugged into the Zwift virtual cycling system. Yet, for the audiences tuning in via YouTube, it’s easy to mistake it for an actual broadcast of a road race, as the graphics emulate the physical map and terrain of the route. Even the broadcast commentary was similar.

[Read: This GTA V mod lets you ride your own bike around Los Santos]

The Tour is the latest in a whole range of digital innovations that have brought sports into the homes of millions of people during the COVID-19 lockdown when they all had to press pause on their physical events programs.

Yet, the foundation for these experiments was laid in January, when the president of the International Olympic Committee, Thomas Bach, told all International Sports Federations to figure out their esports strategy. The urgency is all the more apparent when observing that all those sports sponsors – and broadcasters – are already aligning their brands with esports.

Coca-Cola, Intel, and Samsung, among many others, are already highly invested in esports. David Beckham’s newly formed Guild Esports company announced it will establish a professional esports team for the 21st-century version of football, Rocket League, a videogame in which players race cars around an arena driving a ball towards a goal using the online platform Battlefy.

COVID-19 has accelerated the alignment of elite sports industries with esports – and even those who previously dismissed esports as not being like real sport now have the IOC president to contend with. Bach noted that platforms like Zwift were absolutely the same as sports, suggesting a future in which virtual sport may be a bigger part of the elite sports scene. It may be no coincidence that the IOC’s Esports Liaison Group is chaired by the president of the International Cyclists Union, David Lappartient.

Soon after the lockdown began, sports were racing to get in on the virtual action. Among the first was Formula One, which was nudged into producing “Not the Australian Grand Prix,” when its Melbourne race was canceled. Teaming up with Veloce Esports, F1’s first digital event used its official computer game to produce a unique experience, where gamers, F1 drivers, and celebrities came together to race the Australian track.

In April, the ATP and WTA organized an esports tennis competition instead of the Mutua Madrid Open, using Nacon’s Tennis World Tour video game. Again, some of the world’s biggest names came together to compete. Great Britain’s Andy Murray took the title.

Also in April, we saw the virtual Grand National take place for the fourth time. This year was special, as – thanks to COVID-19 there was no accompanying physical race. Instead, racing fans – and gamblers – could tune into YouTube and watch a race of computer-generated horses, all of which had been expected starters for the actual race. The winner was decided in advance of the start gun being fired, based on the rider’s previous form, day conditions, among other factors.

This algorithm-driven sport may not feel much like a sport for many – but it worked. We can expect to see a significant amount of business generated from gambling opportunities around virtual sports.

Football was slow to get back on to the pitch, and many clubs began experimenting with in-stadia innovations. By the time players were back on the field – without spectators – some clubs had set up giant screens inside the stadium giving the impression of thousands of fans. Clubs also experimented with virtual reality to train players and real-time canned audience sounds became part of a new language of broadcast production.

The international basketball federation was next, producing the world’s first international esports version of its sport in May using the game NBA 2K. While the game has not previously impressed gamers, it did well to bring new audiences to basketball at a time when no live events were taking place.

Finally, there has also been a whole lot of esports happening during lockdown, occupying the space where many of these aspiring sports brands seek to locate themselves. Gaming has had a very good lockdown indeed – data shows that game sales and use have grown significantly over 2020.

Lockdown brought esports further into the mainstream – even the BBC broadcast events on its digital platform. We also saw how the creative and cultural industries are coming together around esports titles. Of note were the virtual concerts that took place in Fortnite, particularly the American rapper Travis Scott’s spectacular performance, which could only be seen live if you were logged in as a player within Fortnite, prompting fans to download the title just to see the concert.

In the same way that social media platforms such as TikTok and Instagram are establishing new markets and audiences, esports and the virtualization of sport are showing how new economies are emerging around novel, digital sports experiences through gaming platforms.

While many of the COVID-19 esports events from international sports federations have been more showcase events than elite competition, they have paved the way for a new normal to emerge, not just for participants, but for the many industries that produce media events.

This article is republished from The Conversation by Andy Miah, Chair in Science Communication & Future Media, University of Salford under a Creative Commons license. Read the original article.

Read next: Scientists used underwater drones to find out when sperm whales like to eat