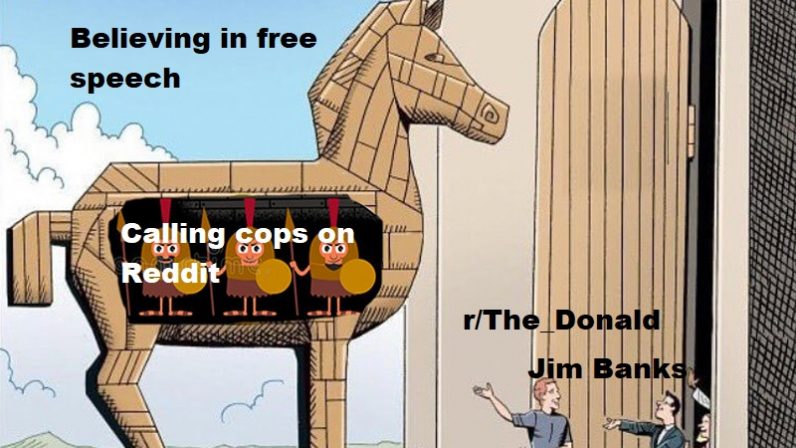 Reddit‘s taken r/The_Donald’s teeth away. The once proud community was, in its heyday, the vanguard for the MAGA movement. Now it’s just a sad group of self-declared victims whining about how unfairly they’ve been treated by social media.

Back in June, the subreddit was quarantined for “threats of violence against police.” Widespread community outrage over an Oregon politician’s threat to have law enforcement officers bring Conservative lawmakers back to session resulted in a rash of anti-police, pro-violence posts on the forum.

The quarantine essentially just forces visitors to acknowledge a disclaimer indicating the community is being given time to clean up its act. You can still access every post and comment – except those deleted by the community‘s own moderators.

This punishment didn’t seem fair to anyone. The members of r/The_Donald were outraged that they’d been targeted when so many other other groups on Reddit were allowed to get away with calls for violence (but her emails!). Those who saw the community as a hate group thought the punishment was lenient. Activists and journalists have written dozens of articles clearly documenting the misogyny, bigotry, and calls for violence that once permeated the vast majority of conversations on r/The_Donald.

It turns out, however, that giving r/The_Donald time to fix itself has been the most devastating thing that’s happened to the online alt-right movement since the Daily Stormer and Infowars were taken offline. The subreddit no longer has any edge. It’s admin and mods are so terrified they’re going to miss a bad thread or get brigaded that nearly every single conversation ends up fizzling in preemptive warnings.

The current status of r/The_Donald is one of frustration. Its administration today posted snippets of an email the Reddit team sent them explaining why they’d remain under quarantine. Per Reddit:

We’ve been clear that we expect to see notable and sustained community transformation regarding reporting and downvoting behaviors. We once again measured this quantitatively over the 60 day appeal period, using the same methodology as at your last appeal, and which we use to evaluate all quarantined subreddits.

Unfortunately, we did not see the required change in these measurements; your subscribers continue to upvote violative content at a significantly higher rate than subreddits of a similar size and topical focus to yours, in line with the figures we see in other quarantined subreddits, across the political spectrum.

(Please do note that we understand it can be frustrating that we can’t share this methodology with you. But given the fact that your subreddit is a frequent target of those who may disagree with you or the President politically, keeping the exact methodology confidential helps protect you against brigade attempts at gaming our statistics).

The r/The_Donald administration spends the entirety of its post expressing how unfair it is Reddit won’t reveal the exact methodology behind its system. Ironically, their chief complaint is that it’s easy to find examples of the kind of language that r/The_Donald was quarantined for on Reddit. This apparently indicates that the subreddit’s admin is more interested in forcing Reddit to change its policy on inciting violence than on ensuring its community ceases doing so.

Even more ironically, Reddit‘s forced r/The_Donald to abandon its pretense that its members support free speech and the Constitution. Conservative lawmaker Jim Banks has taken up r/The_Donald’s fight with Reddit, like the over-protective parent of a 17-year-old athlete storming the field to demand the coach put their kid in.

The US Constitution guarantees freedom of expression and the right to free speech. This means that the government can’t punish you for expressing yourself within the boundaries of the law. It also means the government can’t punish a private company for dictating the terms of its service. This ancient comic by XKCD explains the situation eloquently:

When a representative of the US government attempts to pressure a private company into changing its engagement policy, we’re seeing literal censorship at work.

When a private company tells people what they can and can’t say on its platform, we’re seeing the free market at work. Nobody has the inalienable right to use Reddit. Everybody has the opportunity to make their own social media site with whatever speech rules they choose.

The Constitution protects us from tyranny. Representative Banks has no more business dictating what Reddit should and shouldn’t allow on its platform than he has telling the owner of a bait shop what color lures they’re allowed to sell.

The quarantine’s forced r/The_Donald to suffocate in its own hypocrisy. A year or two ago, any parent with an impressionable teen would have been smart to worry about the group‘s members radicalizing their kid. With enough exposure, it’s easy for young folks or confused adults to buy into the whole “red pill” idea, as I wrote previously:

They subscribe wholeheartedly to the fantasy that they’ve been “red-pilled” and thus have somehow magically gained the ability to convert folk wisdom and news articles into doctoral-quality thesis’ on sociopolitical discourse. It’s cute. I can’t help but like their “Dunning-Kruger” world and the simplicity it represents.

But now? The emperor has no clothes. The r/The_Donald subreddit isn’t a non-stop campaign rally anymore. It’s hard to imagine an influx of “red pilled” youth flocking to a message board full of people whining about having their “free speech” stifled by a social media network.

The group still has plenty of active members. But r/The_Donald will never be the 24/7 Trump Train party-barge it once was.

Let’s check back in once this next 60 day appeal is up, shall we?