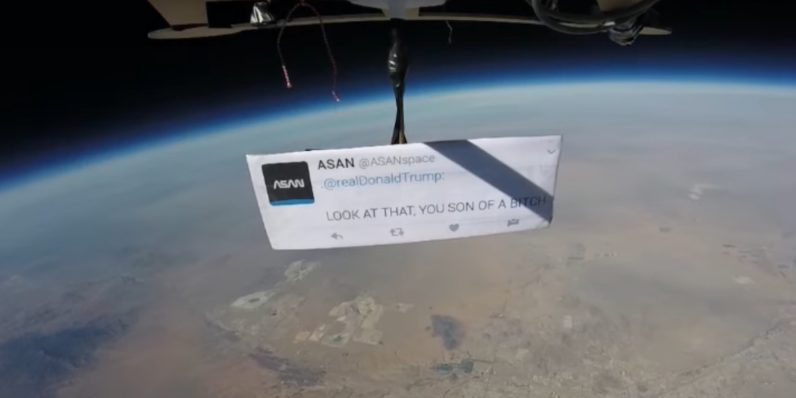 A balloon just took protest tweeting at Donald Trump to the next level — literally.

The Autonomous Space Agency Network, an independent space exploration community, launched the tweet with the Aphrodite-1 balloon. You can watch the balloon’s progress below, provided you’re not claustrophobic:

The line itself might seem like a generic dig at the President, out of context. But it’s actually a quote from late astronaut Edgar Mitchell. When he walked on the moon, Mitchell said all of Earth’s problems seemed so small from such a distance:

You want to grab a politician by the scruff of the neck and drag him a quarter of a million miles out and say, ‘Look at that, you son of a bitch.’

ASAN is touting this as the first “protest in space,” though technically the sign never got to space. It flew 90,000 feet up, which is still a few hundred-thousand feet short of space. The heights in the video are still pretty dizzying.

Read next: Grab the NES Classic now, because Nintendo just discontinued it