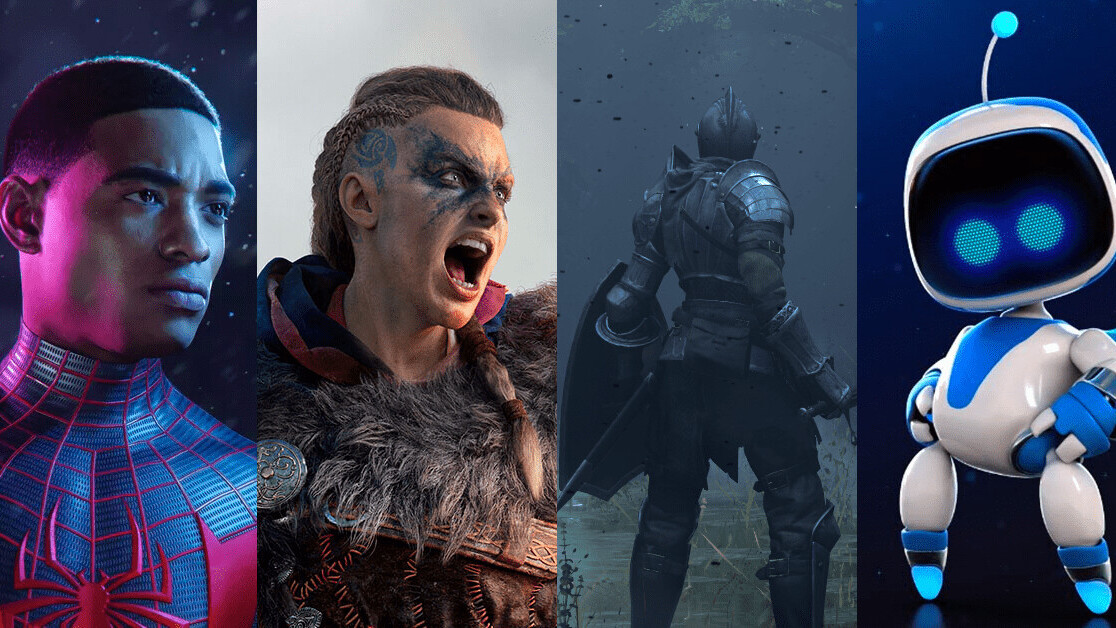 It’s finally here, kids: the PlayStation 5 has finally launched, and it’s got a plethora of games to play on it. Here are our takes on each one.

As with the Xboxes, there are two versions of the new console on offer — the regular edition, and the digital edition. The only major difference between the two appears to be that the standard version has a disc drive, allowing you to play physical copies of your games. You can read our full review of the console here.

The next generation of play is lighting up around the globe. #PS5 pic.twitter.com/hqP6FxI3OH

The PS5’s best feature, potentially, is that you can expand the storage with an M2 SSD. It’s a more a la carte option than the Xbox’s proprietary expansion option, which allows for more flexibility — assuming you’re willing to take your console apart to put one in. That’ll be useful when you’re playing these games, because next-gen games are pretty massive.

If you’ve read our Xbox Series X/S launch games article, then you get the idea. My colleague Nino and I will go through each game available to play at launch and let you know how we liked it, and what’s to like about it on the next-gen console. Here’s what we’ve been playing on our PS5s:

Rachel: While this spin-off title is not quite as meaty as its predecessor, it’s still a great game. Miles Morales gets his own adventure and his own new powers, and the game simultaneously shows them off while letting you experience the PS5’s power in all its glory. You can read my full review of the story here.

The game comes in two modes on next-gen, called “Performance” and “Fidelity.” The former is designed to keep the game running at 60 FPS consistently, and as such has a slightly lower resolution and no ray tracing. The latter, on the other hand, goes for all that ray tracing goodness, but will run closer to 30FPS. You can switch between them at will.

Nino: Demon’s Souls is probably the most highly anticipated PlayStation 5 launch. It’s a remake of the 2007 FromSoftware PS3 classic, rebuilt from the ground up for Sony’s new console.

Demon’s Souls was the first in the now legendary Souls series, a series of difficult and obtuse action RPGs, that has garnered a hardcore following from those who have the patience for them. This PS5 remake by Bluepoint Games is faithful to the original in most ways, while bringing the visuals into the modern era. Demon’s Souls runs at a smooth 60FPS and it looks absolutely fantastic.

I only got my review copy yesterday, so I’ve got a long way to go before I can share my final thoughts. Keep an eye on TNW for more on this game that could very well become my game of the year.

Rachel: This is the game intended to teach you what the DualSense controller is capable of. For that reason, I do recommend everyone play it at least once. It’s absolutely adorable, and surprisingly absorbing — though I do admit there are some levels that aren’t as good as others. Basically if you want to know exactly what the PS5’s feedback system and haptic triggers feel like, this is the game to play.

The game isn’t just a hardware showcase — it’s also a blatant celebration of all things PlayStation. If you have any fondness for the brand, you’ll find your nostalgia indulged here — one level is literally a trophy case of all the hardware Sony’s ever produced. I also enjoyed finding the many Easter eggs shouting out specific games.

Nino: Sackboy, the hero from Media Molecule’s LittleBigPlanet series, is back with a new adventure that fails to excite.

Sackboy: A Big Adventure is an isometric platformer set in a cutesy handcrafted world. You run and jump around the levels to collect bubbles and costume parts and that’s about it. It all looks and controls fine, but there’s just not a lot to it.

Surely the local multiplayer with up to four Sackboys is fun if you have kids, but otherwise I can’t recommend anyone spending $60 on this one. Maybe get it on sale if you’re craving more platforming after finishing Astro’s Playroom.

Nino: Godfall was the very first title shown running on PlayStation 5 and it’s an interesting one because it’s one of the very few launch games that is only built for this new generation of consoles.

Godfall is an action RPG with a heavy emphasis on the action part and some looting sprinkled on top. The combat feels good, mechanics like countering and finishing moves are satisfying to pull off, but that’s about it. The gameplay gets repetitive quickly and the graphics are beautiful from a technical perspective, but the art design is generic and soulless.

Maybe I’ll revisit Godfall once I’m bored with the rest of the launch line-up, but right now there’s no reason to pick this up over Demon’s Souls, Assassin’s Creed, or Spider-Man.

Nino: I can not stop playing or thinking about this game. Read my review if you want to get the full story, but the gist is that it’s a more streamlined, cohesive experience that’s probably my favorite entries in the series.

Valhalla already looked great on PS4 Pro, but it looks even sharper on the PS5 and playing it at twice the framerate makes me never want to go back. It doesn’t have any fancy ray tracing features we’ve seen in Ubisoft’s other open world launch title, but I’ll take a high framerate over fancy reflections in this case.

Nino: When Bugnax was first unveiled, it took the internet by storm with its cutesy trailer and catchy song. The reveal trailer didn’t make it clear what the actual gameplay was going to be, but it looked like a combination of Ape Escape and Pokèmon Snap, which sounded awesome. Now, Bugsnax is out and it turns out to be … something else.

Well, it’s a little bit like those games. But it’s mostly a story about a town called Snaxburg and its inhabitants. You play a journalist who’s looking for a missing explorer called Elizabert Megafig. Your quest starts with you stranding near Snaxburg and you uncover what happened to Elizabert by talking to the villagers and bringing them bugsnax. You have an arsenal of tools and traps to catch the snax, and they all require a unique approach.

The gameplay in Bugsnax isn’t great. It’s often confusing what the game wants you to do and figuring out the puzzles isn’t always satisfying. What is cool about it though, is its story. Bugsnax’ plot is way more interesting than the visuals have you believe and it’s worth playing all the way to the end. It’s free on PlayStation Plus anyway, so you might as well give it a go.

Price: $24.99, or included with PlayStation Plus this month
Also available on: PS4, PC

Rachel: What might, at first glance, appear to be another softly scored, vaguely scripted indie platformer about a voiceless lone protagonist in a world of delicate beauty (think RiME or Abzu) proves to be something more the moment you fire your first arrow. The Pathless has an extraordinary movement system — you fire your arrows at little floating talismans, which fill your sprint meter — and is at its most fun when you’re using it to navigate the world. While it’s not perhaps the most extraordinary title available on the PS5, it’s got a charm all its own.

Given that it’s available for the likes of the iPhone (I remember this being used to advertise Apple Arcade a while ago), the graphics aren’t exactly going to test the limits of the PS5’s hardware. I have a feeling it’ll definitely get shuffled to the bottom of the priority list compared with the likes of Demon’s Souls or Miles Morales. But if you want a palette cleanser from those games, this one will pleasantly let you kill a few hours.

Rachel: I haven’t had the chance to play this game on a previous-generation console, so all I can say is that it’s absolutely stunning on a next-gen console. I can think of few genres that benefit more from higher FPS and resolution than racing. The new graphics mean better weather simulation, sharper environments, and dynamic effects.

Additionally, the PS5 version of Dirt 5 has full support for Sony’s new DualSense controller. It rumbles a lot more realistically, and it’s an amazing showcase for the new haptic triggers. If you want a game that feels like a real test of what the PS5 can do, you might want to give Dirt 5 a try.

Rachel: Few games of this generation or the last exude sexy, gothic energy with as much abandon as Devil May Cry V. I was in love practically from the moment I booted it up, and the game only got better from that point on. You can read my full review here.

The great thing about action games like this is that they’re usually always locked at high frame rates — and if they aren’t, they should be. The game gives you the ability to turn ray tracing and 120FPS mode on (though not at the same time) if you choose. It’s nice to have the option. Also, you get to play as Vergil — and that’s awesome!

Nino: It’s safe to assume that every popular free-to-play game from the old consoles is going to receive an update to take advantages of the new ones sooner or later. Fortnite has already been patched and it looks great.

The graphical improvements aren’t going to set the world on fire, but Fortnite looks and runs great on PS5. The game now runs in 4K (it ran in 1440p on PS4 Pro), has faster load times thanks to the new SSD and the split screen mode now also runs in 60FPS.

The physics engine also received an upgrade. Grass and trees now respond to explosions, and fluids like smoke and water look more realistic on PS5.

Rachel: Hey, remember when No Man’s Sky was kind of an alternate word for “fundamentally undercooked game released ahead of schedule”? It’s taken years, but NMS is finally the game it’s always meant to be. Not only is it visually spectacular, you can now play with up to 31 other players.

What was originally a rather lonely experience can now involve a full-blown community, with the ability to build bases and colonies together. The new visuals and fast loading times supported by the PS5’s SSD definitely give the game the upgrade it’s always longed for.

Nino: Mortal Kombat 11 got a free upgrade for next-gen consoles that improves load times and resolution. I had to squint to see the difference between the old and new versions, but that’s more of a testament to the game’s already stellar visuals.

Another neat addition in MK11’s next-gen offering is the ability to play against people who are still on the previous generation of consoles. Unfortunately your story mode progress won’t be transferred over to the PlayStation 5 version of the game, so you might want to finish that on PS4 before upgrading. All your rewards (like Frost) are safe though.

Some titles – like Control, and FIFA 21 – are set to receive their next-gen patches in the coming weeks. We’ll be sure to update this article as we get our hands on these.